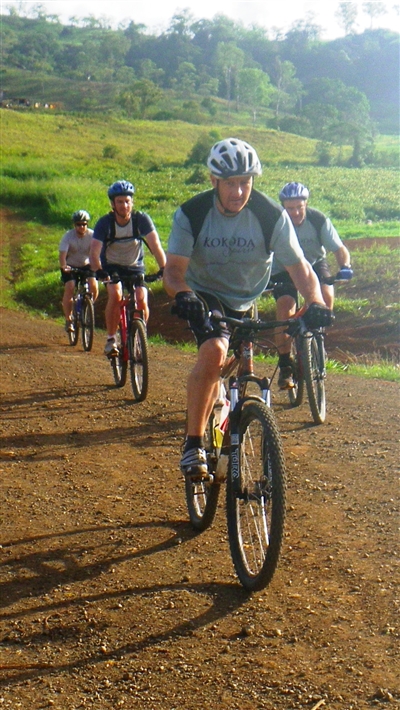 Australia's fastest skier and legendary Paralympian, Michael Milton, has just returned from Papua New Guinea where he mountain-biked and walked from the north to the south coast, a distance of 293km, in just eight days.

The Kokoda Spirit Coast to Coast adventure included three days on a mountain bike and five days walking the Kokoda Trail, a trek that Milton has done before.

He and friend Wayne Wetherill from trekking company Kokoda Spirit and two others started their journey at Buna Village on the beach, near Poppandetta on the north coast of PNG. From there they travelled for 120km and two days on mountain bikes, crossing 23 creeks and rivers.

"The terrain was fairly flat but the surfaces we were riding on changed all the time - from pot-holed bitumen to boggy sand in a matter of minutes. It was hard and hot riding but frequent rests made it a lot easier.

"Many of the bridges along the route were washed away during the cyclone in 2007 so we did a lot of swimming but we weren't complaining. It was such a refreshing break from riding," said Milton from his home in Canberra where he is recovering.

Arriving at Kokoda Village early in the afternoon on day two, the team wasted no time starting the walk and took just five days to reach the southern end of the Trail at Owers Corner.

"The first time I did Kokoda in 2006 it took eight days. This time we did it in five so it was really hard and also much wetter. The humidity and the rain really takes its toll on my hands and walking with crutches in mud when you're sinking and slipping all the time makes it that much harder.

"At camp the night before we were due to get back on the bikes for the two-day ride to Port Moresby, my right hand was so sore and weak I wondered how I would change gears," explained Milton.

He did manage to get back on the bike to ride the 80km into Port Moresby, complete with police escort.

"I'm not really sure what the police escort was for but it made us feel like rock stars. When we arrived at the yacht club, we rode straight into the sea. It was a great feeling and an enormous relief when it was over and we could finally have a shower and sleep in a real bed," said Milton.

He hasn't come home unscathed though and is still waiting for some nerve damage in his hand to heel. It's a serious injury for a man who walks on crutches. Was it really worth it?

"Absolutely. I had a great time. I love to test my body, probably even moreso since my cancer diagnosis and surgery two years ago. Life is short and I'd much rather die riding my bike or walking Kokoda than sitting in front of the television."

You can read about Michael's eight days in PNG in more detail by checking out his LATEST BLOG.

Photo: Michael leads the pack as they head away from Kokoda towards Port Moresby and the end of their journey from coast to coast.