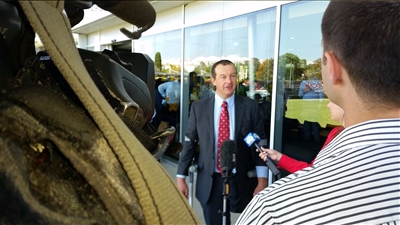 From The Canberra Times

It meant he couldn't watch Simon Patmore become Australia's first Winter Paralympic gold medallist in 16 years live - especially disappointing given Milton was the athlete whose tracks Patmore was following in.

The TV station has come under fire in recent days for their lack of coverage, which has left fans resorting to watching streams of people recording footage on their phones.

Milton wasn't expecting the Seven Network to show everything, but he felt it should be showing live footage of Australians competing.

He pointed to New Zealand where they had six hours of live coverage on the opening day on Saturday.

"[It's] Channel Seven's first effort broadcasting the games - I would love to see it better," Milton said.

"I think it's unrealistic to expect blanket coverage like the Winter Olympic Games, but there's justification for some prime time viewing and some events live.

"When you compare the coverage here with other countries - last Saturday was the first day of sporting action and in New Zealand you could watch six hours live coverage.

"In Australia you could watch that day's action the next day at 11am ... they haven't done it justice."

Milton was fitting in his Winter Paralympic viewing around work, family and getting ready for an attempt to get his third world record.

The 44-year-old cancer survivor will attempt to break 32 minutes 55 seconds for five kilometres on crutches at the AIS track on Friday at 1.15pm.

He's even aiming to break the 30-minute barrier as he also raises awareness for the charity Kilted to Kick Cancer, which focuses on prostate cancer.

While he felt a kilt was too heavy to run in, he's instead found a tartan netball skirt that he'll don for the cause.

The idea came out of his regular park runs, which made him confident he could set a new world mark.

It will add to his two other world records - he's the world's fastest skier with a disability, reaching 213.65km/h, and has done the fastest marathon on crutches of five hours, 23 minutes and 30 seconds.

"I'm looking forward to a bit of pain tomorrow. Thirty minutes is going to be about digging deep," Milton said.

"I've done all the training, all my equipment's sorted, just looking forward to digging deep and hopefully achieving my goal."