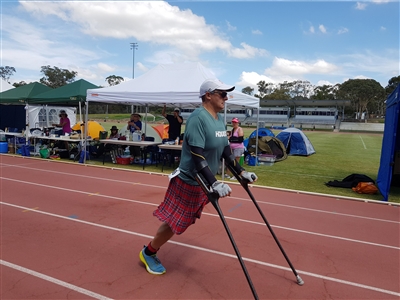 Milton looked spent as he crossed the line after completing just over 12 laps of the 400m AIS during the annual CBR48 endurance race.

"It was tougher than I expected. Certainly the heat played a part in that. I really wish I had some gas in the tank to up the pace and break 30 minutes but it wasn't to be." said Milton.

Maybe it had something to do with running in a kilt to raise awareness for prostate cancer.

"What's under your kilt," Milton asked waiting media before the start.

"As a two-time cancer survivor, I can tell you that running 5km is way easier. If just one guy gets his prostate checked as a result of seeing me running in a kilt today, it will be well worth it."

Also check out the media coverage of Milton's attempt::