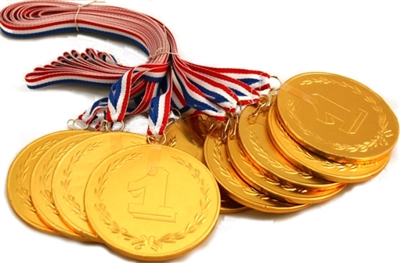 Day six of the Olympic Games and, let's face it, Australia's results have been less than inspiring. The much-touted men's 100m relay team got lost in the pool, the Opals went down to France, defending champions Crawshay and Brennan in the men's double scullswere left behind in the semis, golden girl Seebohm got it all upside down when she swam faster in the heat than in the final and Magnusson has been a bit hit and miss.

The one shining exception is the gold medal winning performance of the 100m freestyle relay girls. But there's a limit to how much inspiration a nation can get from one gold medal. It certainly won't carry us through the next 11 days. Channel Nine editors and millions of sleep-deprived Australians are desperate for a few more shining exceptions, a few more gold medals.

So what's gone wrong? What's changed since the glory days when Australia dominated in so many sports despite being one of the world's population minions? Why don't we still punch above our weight?

Before I answer THAT question, I need to take a deep breath because what I am about to write is tantamount to treason in our sport-loving nation. Here goes...

Our athletes are too soft!

There, I said it. Our athletes are too soft. I said it again. As my inbox beeps like a fire alarm in an oven, I will try to explain myself.

While I am a big supporter of funding for sport and think the Australian Institute of Sport do an awesome job, I fear our elite athletes are molly-coddled, encased in a protective bubble full of experts and minders. At times that's exactly what they need but they also a chance to toughen up.

James Magnusson wasn't the only one this week to put his poor performance down to a lack of sleep thanks to a chronic case of the jitters. There was talk that Seebohm was so nervous she didn't eat on race day and that some athletes are so addicted to social media that they're listening to what their "friends" are telling them instead of focussing on what they need to do to win.

I'm no sports psychologist but to me this all points to a lack of mental toughness. Our athletes are just not in the right head space to deal with the pressure of Olympic competition. When the stakes are high you need to be able to control your nerves, manage your time, avoid distractions, get some quality sleep, eat properly and perform your best. Let's face it, in the world of elite sport, this is basic stuff.

I firmly believe that "doing it tough" tests an athlete's resolve and weeds out the people who "want it bad" from those who "must have it, whatever the cost." My question is: Are our athletes paying a high enough price for the privilege of representing their country at the Olympic Games? One way or another, you have to pay for mental toughness.

Much of Australia's sporting success was built on the back of people who lived and learned the hard way, people who learned their craft with a cricket stump, a golf ball and a corrugated water tank. I don't pretend to compare myself with Bradman but I think my own experience as an athlete with a disability in a low priority sport contributed a great deal to my mental toughness.

Back in the 1990s when I was learning how to be a ski racer I received very little public funding. I worked jobs at home and in the US, earning money to pay for the next season's training. My coach worked for free and there was no one to organise or pay for travel to and from competitons. More than once I emptied my pockets to get to a race knowing I would have to win so I had enough prize money to pay for the return trip to my training base. There's nothing like the threat of sleeping rough in the snow to spur you on to brilliance!

I spent season after season lugging my skis across Europe and the US on trains between races. When my coach was unable to travel with me, which was most of the time, I talked my way onto other country's able-bodied training programs and came last in many able-bodied races just to get real race experience.

It was a struggle - financially, physically and emotionally - but I did it because I wanted to win, I wanted to be the best in the world. I learned to do it on my own, without Facebook friends and without a huge team of experts analysing and advising me. I faced my fears and my nerves on my own every day and I learned to sleep and eat when it mattered.

So, what's the answer? Tougher training? Boot camps? Greater incentives? Should we drop our potential gold medallists in the middle of the desert and let them find their way home?

That's not such a silly idea. Let's send them on a training camp in a remote location with no shops, no internet access and no mobile coverage. Make them put up their own tents, cook on a single gas burner, give them a long drop toilet to share and a hard-arsed coach to flog them for a month.

Too tough? Oh well, I have 11 days to come up with a better solution and, in the meantime, our athletes in London might just rise to the challenge and bring home the gold to prove me wrong. I hope so. I will be watching anyway.

Michael you are spot on. I am sick and tired of watching our athletes balling their eyes out for coming second. Get over yourselves I say. And Magnusson saying after another silver "swiming today is the last thing I want to do" well hello, can I have a refund of my taxes please.
Cheers,
Norm

Well done Mike, how does an athlete become mentally tough without training through it? Send them outback, you go with them and show them what real mental toughness is! Get the ABC to cover it and then we will see what REAL athletes are made of!

Thanks for the support. I was a bit nervous putting this sort of opinion out there but I want to see our athletes succeed and be supported in every way possible. But I do think there are good times for some tough love.