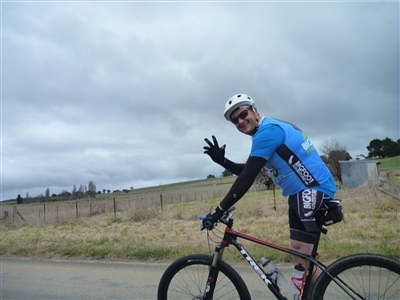 The well-known local made his name on the ski slopes, winning 11 Paralympic medals and breaking the Australian speed skiing record with a staggering 213.6km/hr. But these days he spends much more time on the bike. In fact, he also recently completed a gruelling six-stage mountain bike race in Alice Springs. "Training," he says, for 'Ride the Divide'.

Milton runs Big Foot Adventures, a small operation offering a limited number of small guided bike tours each spring and autumn around Canberra and the region.

"As the lead guide, I have to be really fit and ride ready. It's a 150km ride, some of which I will spend pushing others up hills. I might also double back to ride with someone who's doing it tough or race ahead to check on or reign in others who are ahead of the pace.

"I've spent my life cycling in and around Canberra and I'm still finding new places to explore. We started Big Foot Adventures a few years ago mainly to justify my many cycling trips.  I turned my hobby into a business," said Milton.

Ride the Divide - from Canberra to the coast - is the most popular tour but Milton is quick to point out that ten crossings isn't that rare.

"It's a fairly well-trodden route these days, especially for serious cyclists but, for most people, it can be pretty daunting. We offer a fully supported tour, complete with a follow vehicle. All the riders have to do is pedal so they can cross this iconic ride off their bucket list," said Milton.

Big Foot Adventures will run one more Ride the Divide adventure this spring on 17-18 October.  They have also scheduled a one day ride called The Big Wee Ride on 24 October.