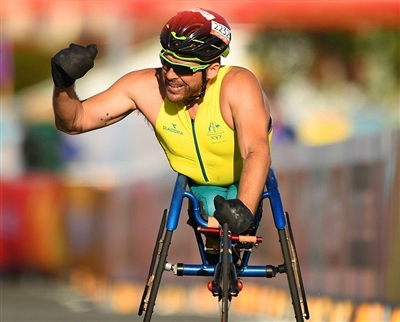 Please stop calling the Comms Games "fully integrated". They're not and here's why they shouldn't be.

The public embraced the para-events and the athletes - their stories, their triumphs, their failures. Competitions and races were shown in prime time, para-athletes were interviewed and their achievements celebrated alongside their able-bodied counterparts. Wheelchair racer and legend, Kurt Fearnley, was chosen to carry the Australian flag.

It was fantastic. I thoroughly enjoyed watching it all, and I reveled in the exposure and support that our para-athletes were receiving. But then my social media feed started to fill with well-meaning posts calling for the Olympic Games to be "fully integrated like the Commonwealth Games". I saw one post with 65,000 shares. Friends were pulling me up to talk about "how wonderful it is to see para-athletes included in the CommGames."

Let's get this straight: the 2018 Commonwealth Games, although more inclusive than previous Games, was not "fully integrated". Seven sports were included…seven! There were 22 sports on the program at the last summer Paralympic Games in Rio. 4342 athletes competed - that's 4042 more than on the Gold Coast. Is that really integration? Sounds more like exclusion to me.

Don't get me wrong; it's great to see para-events and athletes included but it's not new. This has been happening for years. Way back in 1988, after finishing 11th in the Giant Slalom at my first ever Paralympic Games, I was invited to compete in an "Exhibition race" at the winter Olympics in Calgary.

The difference this time around is that the events and the athletes were given equal billing. Medals won by para-athletes were included on the tally, and the television coverage and exposure was way, way better.  As a result, a lot of people assumed GC2018 was fully integrated and they got a little excited, calling for the Olympic Games to follow suit.

Why does it matter?

Firstly, it's just not practical. The summer Paralympic Games is a full 11 day program. Imagine integrating that into the equally full 16 day Olympics? How many more venues would be needed? How many more volunteers? Where would all those athletes sleep? Flights? Food? Traffic disruption?  It just wouldn't work. And the solution? I can guarantee events would be dropped and it wouldn't be the able-bodied ones!

Secondly, the desire to fully integrate the para-events into the Commonwealth or Olympic Games comes from a belief that those events are somehow superior, better, bigger, more prestigious. Maybe that's true but, while para-events and athletes are still considered somehow inferior, I'd rather stick with the status quo thanks.

Lastly, this misconception that the Commonwealth Games is fully integrated is dangerous. People with disability all over the world have fought long and hard for small gains in equality and we're not there yet. People with disability are still under-employed, under-educated and under-represented. Sport is not yet equal either, despite the gains at GC2018; you only have to look back a few weeks to the winter Paralympic Games and the appalling Australian coverage it received to find gaping inequality still. Athletes and people with disability need your support to keep making progress. Fake gains don't count.

GC2018 showed spectators the world over how fantastic para-sport can be.  If full integration isn't the answer, what is?

Help us increase exposure for para-sport rather than campaigning for it to be absorbed into able-bodied competitions. We're good enough, interesting enough, cool enough and strong enough to go it alone… really we are!

Caption: Wheelchair racer Kurt Fearnley was instrumental in getting GC2018 to increase the number of para-events in the 2018 Gold Coast Commonwealth Games but the numbers are still far from "full integration."