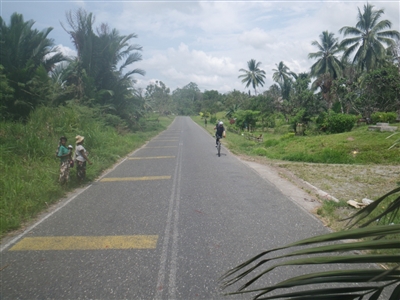 Trip report on the Coast to Coast Challenge PNG

Our schedule was always going to make this a tough trip for me but I am always up for a challenge. The plan was to ride from the north coast of PNG at Buna where the Japanese fleet landed, Ride to Kokoda, Walk the track and then get back on the bikes and ride down to Port Moresby. The bikes would be flown from Kokoda to Moresby and then driven up to Owers Corner for the end of the walk. We had 8 days for this schedule which meant that we had only 5 days to walk the Kokoda track. Most of the commercial trips do the walk in 8 or 9 days so we would be walking long hours and pushing the pace.

Day 1 - A magnificent sunrise over the ocean and a night in what is called a guest house saw the start of our trip. The guesthouse is a wooden frame with a thatched roof and some walls. This one had the end of it over the water and was an amazing place to stay. A real mattress and mosquito net meant that I had a good night's sleep. The ride was 80km and about half rough dirt and half potholed bitumen. It was hot and open but a swim in a creek every couple of hours felt good and cooled things down. The highlight of the day was crossing the kimuzi river where the bridge was washed out in a cyclone in 2007. We crossed with all our gear and bikes on tyre tubes with local guys swimming them across. A night in the village of Pisa and another swim and wash was the end of our day.

Day 2 - Early starts are always in order when sleeping in a tent. Pancakes for breakfast and we were off again. Some 25 river crossings for the day with about half of the bridges washed out meant we were in for some fun. A swim in Eora creek meant that we were now in water coming straight off the Owen Stanley ranges and we felt the difference in temperature. 40 km's on dirt and we were in Kokoda. On the way a long drop toilet that collapsed just as I was preparing to do my business was a lowlight for me. We also had a 2 hour stop in Oivi where we went looking for Sam Templeton's remains after some new information was uncovered during an interview in Japan. Lunch in Kokoda and we started the walk. I always knew this would be the hard part for me on crutches but hard is not a bad thing. 2 hours gently climbing and then 1.5 hours steep climbing and we were in camp at Deniki.

Day 3 - Porridge for breakfast by torchlight and we were off with a schedule to reach the village of Eora Creek. Mostly due to some gastro problems we made camp around 4pm in Alola. It was a tough day walking a long day while sick. Not too many highlights for me this day. We did however stop at Isurava where one of the key battles was fought in WWII. You can't help but feel solemn respect and thanks for our soldiers who helped make our country at a place like this. The motto of the track is on 4 large stone pillars at Isurava. Courage, Endurance, Mateship, Sacrifice.

Day 4 - We all woke up feeling better and made a plan to try and get over the top of the range at 2190m and down to camp at 1900. We were trying to travel light and didn't bring sleeping bags so sleeping higher meant that we might have a cold night but we couldn't do anything about that now. We saw a few other groups this day but didn't do more than say hi to them. We walked into camp right on dusk at around 6:15pm after walking for 12 hours with about 1 hour breaks all day. It was long and tiring and finishing for the day felt great. A very cold swim and wash by torchlight was another interesting experience as was sleeping in all my clothes including my rain jacket with hood up.

Day 5 - 1900 to Menari. Another long day with some stomach discomfort for me. Through the village of Efogi and up what I thought last time I walked the track was the toughest climb of the trip. The hills on the track are constant, they are hard and rough and relentless. They are not much easier down as it is slippery and steep. Chocolate donuts at lunch was a great surprise and went down well.

Day 6 - Menari to Iorbaiwa. I was really starting to fatigue and started to have some hand problems this day. Numbness in some parts and bruising in others made walking on them hard. We caught at group this day that had left 2 days before us so that was a boost to the ego. Spring rolls filled with 2 minute noodles and canned vegies actually taste good in this environment. This day also had the longest single hill on the track up the Maguli range. 2 hours constantly up hill rising over 500 vertical metres. They call it the 9 false peaks as there are 9 flats that all look like you are at the top. A huge thunderstorm at Ofi creek meant we only had a quick swim to minimise the risks of being washed away in a flood.

Day 7 - The last day walking. Doesn't it feel good to know that you are going to make it and the hardest part is over. The whole crew was betting on what time I would arrive at Owers corner with the spread of bets from 2:10 till around 3:30 in the afternoon. I wanted to beat the first bet so I tried to keep an even but fast pace for the day. In the first 2 hours we crossed over 20 creeks. Sandals were the order of the day. The final hurdle is a 45 minute climb up from Goldie river to the finish. Last time I was there Goldie was chest deep and murky brown and we crossed hooked onto a rope line. This time it was a beautiful creek about knee deep and clear. You can imagine this place would have been heaven to the diggers coming off the track. The salvo's were there and a nice wash. The atmosphere of this place was great and that combined with knowing you are nearly done made me a happy camper. 2:01 across the finish line and I won the bet too.

The walk wasn't the end of the day though as we got to the top, had some lunch, put the bikes together and got riding. It was nice to be back on the bike for me but some steep hills kept us working hard. Camp at 5 meant that we would have a short next day to the finish. Another thunder storm just after the tents were up gave us a nice sunset, the way the guys got the big tarp set up on poles in about 5 minutes was a very impressive bit of teamwork.

Day 8 - 15km on dirt road before another 45km of sealed road and a swim in the ocean. From the start of the bitumen we had a police escort. Lots of people beside the road supporting us lifted our spirits for the day. The road had some potholes to keep us awake but the trip had lots of fast descents and was lots of fun. A 1 hour stop to look around Bomana cemetery added a solemn touch but then it was off to the finish line. Some games were played on the bikes for KOM points but it was about the challenge and we all crossed the finish line together where some of the guys on borrowed bikes rolled into the sea while we dropped bikes on the bank and jumped in. Beers were had by many and it was then off for a nice shower and an afternoon eating as much as possible and lazing around the hotel pool.

All in all an awesome trip that I would highly recommend to anyone after a challenge. The trip was run by Kokoda Spirt (www.kokodaspirit.com) They are keen to run it again so send Wayne an email if you are interested.