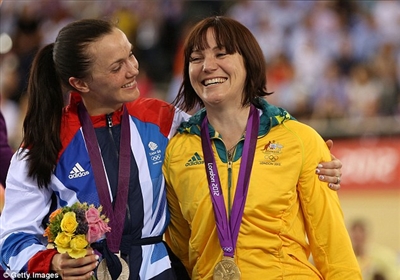 What a great Games for the girls.

They can now lay claim to three of the four gold medals on Australia's tally.

Sally Pearson was awesome in the final yesterday, dealing with a truckload of pressure and expectation and turning it into gold for her country. You have to admire her determination, skill and ability to focus. Such a nail-biter at the end too. Exactly what sport should be about.

Then there was Anna Meares, one of my favourite athletes of all time. If anyone knows how to win, it's Anna. Like Sally, she is always under the spotlight but doesn't buckle under pressure. She rose to the occasion to beat her long time British rival, Victoria Pendleton, in a race that showed just how strong and fast she is. And, in a genuine show of sportsmanship, Pendleton congratulated Meares as they walked off the podium together. Kudos to both of them.

And to Alicia Coutts. Her remarkable achievements seem to have fallen into the shadows of our poor performance in the pool. However, let's not forget that she won FIVE MEDALS (a gold, three silver and a bronze). Where would our medal tally be without her?

Last night Canberra's own Caroline Buchanan recorded the fastest time to go into the BMX competition seeded in first place. Keep your eye on one of the top ranked riders in the world.

One final fantastic fact about the girls at these Olympic Games: For the first time in the history of Olympic competition, all participating countries have female athletes.