Milton to tackle the UTA22 "for fun" 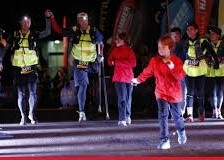 Back to the Blue Mountains to run 22km "for fun"

Michael Milton will return to the Blue Mountains one year after completing the gruelling 50km ultra-marathon to take on the 22km race for fun.

Milton completed the 50km Ultra-Trail Australia course in May last year and says it pushed him to his "absolute limit."

A film was made about his preparation for the race and what happened on the day. Best Foot Forward will have its Australian premiere during the Blue Mountains event.

"Obviously I wanted to be there for that; it's pretty exciting. A lot of people were involved in making this film and many of the 2017 UTA50 crew will be there for its first Australian screening.

"While we're there though, we thought we'd all just run the 22km course and then some more people decided to join us. We're calling ourselves the Venga Bus and taking some tunes along to help keep it fun,  without the cameras and the pressure that came with last year's event.

"Most fun runs are five or ten kilometres so this will still be pretty tough, especially the 951 Ferber Stairs up to the finish. We're all expecting it to turn nasty towards the end," said Milton.

The Ultra-Trail Australia event attracts competitors from all over the world to run the UTA 100km, UTA 50km, the Pace 22km races and two shorter events.  Over 4500 racers plus spectators descend (or ascend) on the Blue Mountains for the four day endurance running festival.

Caption: Michael Milton finishes the 2017 UTA 50km ultra-marathon flanked by his guide runners and his children.