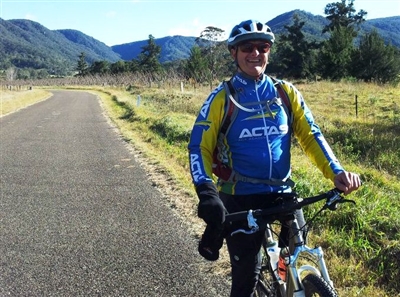 Forget the gold medals. Forget the world records. This week Michael Milton is celebrating being alive.

This Thursday 5th July marks five years since Milton was diagnosed with oesophageal cancer and, just three days later on Sunday, he will also celebrate the 30th anniversary of his first cancer diagnosis as a child.

He's lost a leg, his entire oesophagus and much of his stomach to cancer but says he is still grateful.

"I feel lucky just to be here. Others haven't been so fortunate so this week is about celebrating with family and friends. They've been affected by my illnesses too," said Milton.

Milton's ski racing career spanned more than 20 years before he switched to speed skiing and then cycling. He was on track for selection in the Australian team for the 2008 Beijing Paralympic Games when he discovered he had cancer.

"In the back of my mind I felt I'd had my share of bad luck so the diagnosis blind-sided me.According to the doctors, the two cancers weren't related so I was just bloody unlucky twice. I had a little girl not even a year old and I was just settling into a life at home after many years of travelling. I was devastated and terrified," said Milton.

The recovery has been long and he still struggles with lasting health issues and fatigue.

"These days I'm motivated more by my need to be fit and healthy than by a desire to win or bring home medals. I believe that being physically fit has helped me to survive cancer and could even prevent it in the future," said Milton.

He says the thought of getting cancer a third time scares him.

"It's hard to shake off that paranoia and I worry about my children too. I check them all the time for lumps and bumps and anything out of the ordinary. I am the only one in my family to have had cancer so it's easy to imagine that I may have passed on a defective gene to my kids."

Milton will celebrate his milestones with family and friends this weekend.

Photo: Milton recently rode from Canberra to the coast over the Great Dividing Range. He says "I'm motivated more to be fit and healthy than by desire to win or bring home medals."