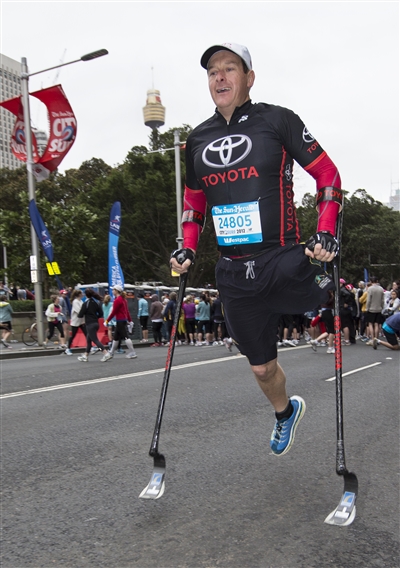 Toyota Ambassador and champion Australian athlete Michael Milton developed the world-first crutches after finishing fourth in his class at the 2011 World Triathlon Championships.

"I came out of the water in second place and then lost a lot of time on the run against the other competitors who all wear a prosthetic leg.

"I knew I had to find an answer before this year's event in October in New Zealand and, with a lot of help, I was able to try them out last weekend in a real race," explained Michael.

The crutches are made from super lightweight, ultra strong carbon fibre with input from carbon specialist Raoul Luescher, previously Senior Technical Officer at the Australian Institute of Sport. The advanced prosthetic feet were made by Ossur, the same brand that South African Olympian Oscar Pistorius used in the 2012 London Olympic Games.

Milton said the City2Surf was the ideal way to test the crutches ahead of the 2012 ITU World Triathlon Grand Final in Auckland this October.

"The City2Surf has a good mix of flat and hilly roads and the crutches felt fantastic. I managed to do the whole thing in about an hour and a half which I am happy with.

"The really good news is that I think there is room for improvement given more time to work on my technique," he said.

You are truely inspirational