Milton prepares for another drenching 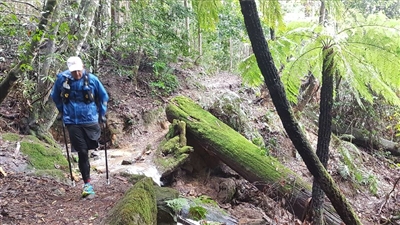 19 MAY 2017, CANBERRA, AUSTRALIA: Heavy rainfall over the next two days will make it very tough and wet for Paralympic champion, Michael Milton, competing in his first ultra-marathon in the Blue Mountains this Saturday.

The Bureau of Meteorology updated its forecast at about 5pm on Thursday and is now predicting up to 80mm will fall on the region in the next two days. Milton's 50km race starts just before 8am on Saturday and he expects to be out on the course for 10-12 hours.

"That's a lot of chances to get very wet," said Milton who arrived in Katoomba late yesterday. "The last few hours will be after sunset which means we'll also get cold."

He and his running mate James Crook, also from Canberra, have experience running in the rain in the Blue Mountains. In March during a training weekend they spent 11 hours running in torrential rain over two days.

"They'd had 350mm the week prior and it poured the whole weekend. Parts of the course were inaccessible due to swollen creeks and stairs were turned into waterfalls. I'd never seen anything like it. We were wet from head to foot the whole time.

"It turned out to be quite an adventure. It was still warm and, although we were drenched, we had a lot of fun," said Milton.

The rain and water really slowed the pair down but they consoled each other with the sure knowledge that race day in May was likely to be dry.

"We really thought we'd had our dose of running in the rain. Now we're back to talking about running in the wet. Plus it could be a lot colder this time," said Milton.

Milton will tackle the 50km route on crutches and is most concerned about how his hands will hold up.

"My hands take a battering when I run, even in normal conditions. But in the wet the thick calluses I have from walking on crutches daily become soft and the skin starts to break down.  It can be very painful," said Milton.

He plans to carry a few changes of gloves and some peanut butter and honey sandwiches.

"The science says I use twice the calories per kilometre running on crutches so I need some real food to give me some healthy energy boosts. I'll be looking forward to the occasional cup of tea at the rest stops too if I get cold."

Milton is a five-time Paralympian and one of only a few who have competed at both the winter and summer Games. He's won 12 international gold medals, half of them at a Paralympic Games. He holds the open Australian speed skiing record at over 213km/hr, ran the Gold Coast Marathon on crutches, has walked Kokoda twice and scaled Kilimanjaro. On Saturday, if the weather doesn't stop him in his tracks, he will become the first person with one leg to complete a UTA race.

While acknowledging it will be difficult, Milton is looking forward to the challenge.

"No doubt the UTA50 will be tough; it's an enormous endurance test, physically and mentally. But after months of training I'm excited to get going, even if it is raining."

For further information please visit http://www.ultratrailaustralia.com.au . You can also download the Ultra-Trail app for Android and iPhones to follow your favourite athlete.