Milton in green and gold for paratriathlon 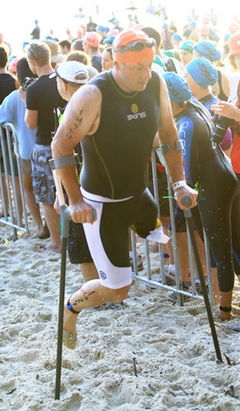 It's sport number three for Michael Milton who has been selected in the Australian Paratriathlon team to compete at the World Triathlon Championships in New Zealand.

Milton holds the record as Australia's fastest ever skier, competed at the Beijing Paralympic Games as a cyclist and already has a collection of Paralympic and World Championship gold medals thanks to a 20-year ski racing career. He's hoping to add to his medal tally in Auckland come October. He may well achieve his goal considering he came fourth in his class at the same event in Beijing last year.

He says that, although he's also looking to improve his swim time, a faster run time is the key and he's been developing some new technology to make his running more efficient.

"Like me, my competitors have one leg but they run on a prosthetic which, because my stump is so short, just isn't possible for me. Walking on crutches uses almost double the energy so you can imagine how tired I get when I'm running. Life with a disability is about problem solving and I am very excited about adapting current prosthetic leg technology for use in my crutches. I believe it will be a world first," said Milton.

He's fairly secretive about how the new technology will look and work as he's only yet tested the prototype.

Paratriathlon will make its debut at the 2016 Paralympic Games in Rio de Janeiro and Milton has been heavily involved in the sport's development. However, he is quick to point out that he is unlikely to compete.

"My motivation to train and compete these days comes from my need to stay healthy and ward off the cancer monster. I have no idea how competitive I will be in 2016. I just like to race, I like to train and I like to test myself. If team selection comes from that I will decide at the time," said Milton.

In the meantime he competes in mountain bike events, running competitions, local club cycling races and triathlons around the country. His schedule this year also includes his first half marathon and half ironman triathlon.

"It's so important for me to be active and I am trying to incorporate that into every aspect of my life: leisure time, work time, time with my family. After more than 20 years as a serious athlete, it's become a bit of a habit and I just don't feel good if I'm inactive or don't have some sort of a competitive goal to work toward," said Milton.