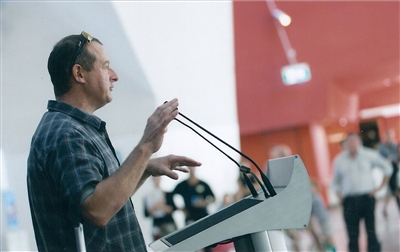 Michael Milton helped open the Freewheeling  Exhibition which has arrived at the National Museum of Australia on the final leg of a two-year tour.

Freewheeling: Cycling in Australia  takes a unique look at the bicycle and its impact on Australia's social, economic and political life over more than 140 years. It features two of Cadel Evans' bicycles and Michael Milton's very own custom-design "stump bucket."

Milton, a six-time Paralympic gold medallist, has been a bike rider his entire life. When he lost a leg to bone cancer aged nine his dad modified his Raleigh Grifter so his prosthetic leg would stay on the pedal.

"Cycling offered me fun, freedom and independence. It's the same today. I have way too many bikes, which I ride for fun, for training, for transport, with my kids. I even ride a bike on stage during presentations.

"I designed the stump bucket when I took up track cycling ahead of the 2008 Beijing Paralympic Games. It attaches to the frame of the bike and holds my stump in place which gives me some leverage, especially at the start," explained Milton.

National Museum Director, Dr Mathew Trinca, said that since Australia embraced the bicycle as a form of transport in the 1880s, our love of the two-wheeler has continued to grow.

"This exhibition is the culmination of two years on the road around the country and we invite you to reflect on how this simple, affordable machine has shaped our lives, and the possibilities it still offers for the future," Dr Trinca said.

"Ten themes explore different types of bicycles and styles of riding, and introduce some of the people whose lives have been shaped by cycling, including Canberra's own para-cycling champion Michael Milton whose carbon fibre 'stump bucket' is among the dozens of fascinating objects on display," Dr Trinca said.

National Museum curator Catriona Donnelly said the exhibition looks at the thrilling danger of the early penny-farthing, the revolution of the chain-driven 'safety' bicycle, the 1980s icon of the BMX and the simple joys of children learning to ride a bike.

Freewheeling: Cycling in Australia  is on display at the National Museum of Australia from 13 April to 9 July 2017.