On the up and up! 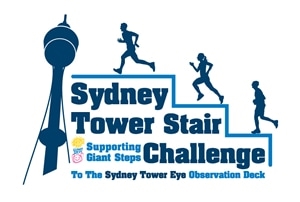 Michael Milton's latest challenge will take him to new heights when, on  Sunday 26 August, he attempts his first ever vertical race - the Sydney Tower Stair Challenge.

But Milton is no stranger to a lofty goal. Two months ago he broke the world record for running 5km on crutches, knocking 40 seconds off the old mark, crossing the line in under 33 minutes (32:39.64). He immediately went in search of another goal.

"No mistake, the Stair Challenge will be tough. I ran up about 400 stairs at Wrestpoint Casino in Hobart as part of the Mark Webber Challenge once. It was really intense; I was gasping for breath and stopping a lot. I am well aware that I will be in some pain during the Sydney Tower Challenge," said Milton.

The two-time cancer survivor says these challenges are mostly about staying fit and healthy in an effort to help minimise the likelihood of a third cancer diagnosis.

"The prospect of illness and death is a great motivator. I feel better when I'm active and setting goals like this one get me out of bed each day," said Milton.

There's a certain irony to this event though. Milton is often frustrated by people who try to insist he take an elevator instead of the stairs.

"It happens in big hotels all the time. Staff almost plead with me to get in the elevator and my response is to take the stairs three-at-a-time. I hope that, in some small way, I am challenging people's expectations of those with disability.

"More than once I've said that running a marathon or climbing a mountain is my way to prove to everyone that I can climb a set of stairs.  Maybe climbing a really big set of stairs will finally put doubt to rest."