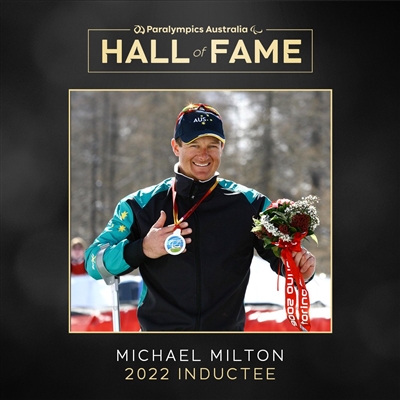 Michael Milton was inducted into the Australian Paralympic Hall of Fame last night in recognition of his Paralympic career, spanning over two decades.

The six-time Paralympian wasn't able attend the presentation but his long-time ski coach and friend, Steve Graham, accepted the award on his behalf.

"We watched the livestream and, as much as I would have loved to be there, this honour is as much Steve's as mine anyway," said Michael from his Canberra home where he is in isolation with his family after they all contracted COVID.

Michael is a legend in alpine skiing circles all over the world. He competed in five winter Paralympic Games between 1988 - when he debuted in his first international competition at just 14 years - and 2006, collecting six gold, three silver and two bronze medals to become Australia's greatest Paralympic winter athlete. In world chamionship competition, he won eleven medals - again, six of them gold.

Retiring from competitive skiing after the 2006 Winter Paralympic Games, he turned his sights on cycling and became one a a handful of athletes to compete at both a Winter and Summer Paralympic Games. In Beijing in 2008, he reprented Australia in the individual pursuit and the xxxx and finsihed in the top ten in thre ccccc

Steve read a speech prepared by Michael in which he called out the lack of free-to-air coverage for the Winter Paralympic Games in Beijing earlier this year and thanked the Paralympic skiers who came before him, competing on the world stage against the odds and with little or no funding. He reminded current athletes to be grateful: "You stand on the shoulders of giants".

Michael was one of five new inductees to the Paralympics Australia Hall of Fame. The others were:

They join nine other members including Louise Sauvage and sport administrators Adrienne Smith and Ron Finneran, both key figures in Michael's on-snow career.

"Adrienne was CEO of the Australian Paralympic Committee in my early years as a ski racer. She once mortgaged her house so the team could compete in the Winter Paralympic Games. Ron Finneran was a ski racer himself and, as long-time head of Disabled WinterSport, has been there throughout my career. Passionate people like them toil for decades to see athletes like me succeed and that's why it's so important that our winter team's performances are not just rewarded but also seen.

"I want to watch snowboarder Ben Tudhope - incidentally 2022 Paralympian of the Year - win a golhd medal at the 2026 Winter Paralympic Games in Italy. I think everyone wants to see that, live and free-to-air."