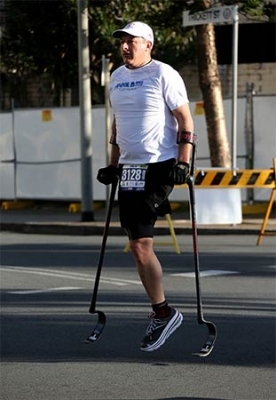 THIS FRIDAY Canberra Paralympian, Michael Milton, will attempt to set his third world record - running 5km on crutches in less than 30 minutes.

The attempt - starting at 1.15pm at the 400m running track at the Australian Institute of Sport - is part of the annual CBR.48hr running event.

If successful, it will be Milton's third world record. He is already the world's fastest skier with a disability, clocking a staggering 213.65km/hr to also become Australia's fastest skier ever. In 2013 he recorded the fastest marathon on crutches, finishing the Gold Coast Marathon in five hours, 23 minutes and 30 seconds (5:23:30).

The current 5km record sits at 32:55:00, set by Derrick Hamel in the US almost two years ago. Milton is aiming to do it in under 30 minutes.

"My best time is around the 33 minute mark and I'm pretty sure I can better that on a good day. But I have some pretty big fatigue issues and good days are sometimes hard to find. I may have to dig deep on Friday to make the time," said Milton.

It's a challenge the two-time cancer survivor says he is up for.

"I'm not that interested in a cancer hat trick so I focus on staying fit and healthy and goals like this world record attempt keep me motivated.

"The beneficiary for the CBR.48hr event is Prostate Foundation of Australia and it's one of the reasons I chose this event for the attempt. The goal is awareness - to get men to have their prostate checked.

"In Australia prostate cancer is the most commonly diagnosed cancer in men and it kills more than 3,300 of us annually.  These days the first step is generally a blood test so there are no excuses," said Milton.

With one in eight men likely to be affected by prostate cancer, the cause is incredibly relevant and important. The aim is for every man to know about the importance of talking to his doctor about testing for prostate cancer from age 50, or 40 if there is a family history of prostate cancer.