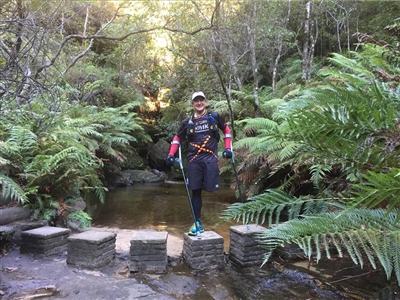 // FEBRUARY 2017, CANBERRA, AUSTRALIA:  Paralympic champion, Michael Milton, will race his first ever ultra-marathon, a 50km long Ultra-Trail Australia event in the Blue Mountains in May.

Ultra-Trail Australia (UTA), the Southern Hemisphere's biggest trail running event, is gearing up for its 10th Anniversary and its largest participation numbers to date, with over 15,000 athletes and spectators expected to converge in the Blue Mountains. Milton will run the 50km course on crutches.

Taking place in Katoomba, NSW, from 18-21 May 2017, the four-day running festival will push even the most experienced athletes to their absolute limits, with participants travelling from around the globe to tacklethe mountains of The Great Dividing Range; Australia's most substantial mountain range and the third longest land-based range in the world.

Participants will scale up stairways and down steep descents ranging from sea level to an elevation of 1,100m, power through dense bushland and creeks, and maneuver through narrow curving paths, all whilst battling the elements of the Blue Mountains, making Ultra-Trail Australia an endurance test of the body and the mind.

"We are looking forward to the level of participation at this year's UTA. Entries to the UTA100 and UTA50 filled up within two days of opening and the Pace Athletic UTA22 has doubled in size since its introduction last year. We anticipate that 2017 will be the biggest and best year yet, putting Australia on the trail running map," said UTA Director Tom Landon-Smith.

Notable Australians participating this year include Running Mum's editor Nicole Bunyan who will tackle the UTA100 for the first time, and six-time Winter and Summer Paralympic gold medalist Michael Milton. Milton holds the open Australian speed skiing record at over 213km/hr and ran the Gold Coast Marathon on crutches. He will attempt the UTA50, becoming the first person with one leg to do so. The Canberra native is no stranger to treacherous trails, walking the Kokoda Trail twice and scaling Mount Kilimanjaro, all on crutches. While acknowledging that this will be difficult he is looking forward to the challenge.

"I know  the UTA50 will be tough; it's an enormous endurance test,  physically and mentally. It will be the longest run I have ever done but I am excited to be part of this world-renowned race,"  commented Milton.[1]

Renowned North American ultra-marathon veterans, Rob Krar and Mike Wardian, will also be competing in the UTA100. Celebrities in the trail running world, Krar holds the fastest time for crossing the Grand canyon and Wardian holds the record for completing the fastest 50km marathon on a treadmill, and the fastest marathon dressed as Elvis.

Registration is still available for the Pace Athletic UTA22 and Scenic World UTA951 online. Participants can register for the Injinji 1km-4-kids on the morning of the race.

For further information or to register, please visit http://www.ultratrailaustralia.com.au