Man who loves a challenge 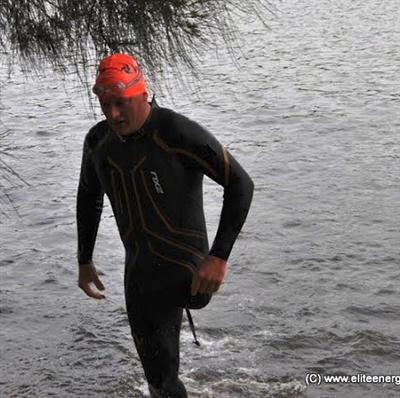 From Great Lakes Advocate (with a few corrections)

It was part of a two day Elite Energy triathlon event, which included Sunday's Ultimate Triathlon. For Michael, the event was an important part of his training for the upcoming New Zealand World Championships on October 22.

Triathlons are the latest challenge for the Paralympian, who lost his left leg at age nine due to bone cancer. He first represented Australia at the 1988 Winter Paralympics in ski racing at the age of 14. Fourteen years later he won four gold medals at the same event in Salt Lake City.

In 2006, he became the fastest Australian downhill skier of all time, clocking 213.65km per hour.

Since then, he has changed disciplines to cycling, winning gold at the Australian Track Cycling Championships in 2007, and overcome an oesophagael cancer diagnosis to compete at the Beijing Paralympics in 2008. He has also climbed Mount Kilimanjaro and walked the Kokoda Trail twice.

Now, despite his claims that he is more of a "weekend warrior" than an "elite athlete", he is ready to take to the world stage again in a new discipline, the triathlon.

Michael said the Forster event was a good opportunity to get in some intense racing experience and work out the transition kinks between the swim, bike and run legs. Since he last competed on the world stage, at the World Championships in China last year in which he finished fourth, Michael has been involved in the design process for a new set of fully customised carbon fibre racing crutches.

"Most people ask me what my strongest leg is, and I tell them, it's my right one," he said with a laugh.

The sprint triathlon included a 750m swim, 20km bike leg and 5km run. Michael said he was confident in his bike leg due to his extensive cycling experience but that his personal best time was the result of a much improved swim leg, the product of many mornings in brisk Canberra water.

It is an exciting time to be involved in triathlons, after the event was included in the schedule for the 2016 Rio Paralympics. Michael said more athletes would be making the switch to the event to try to win a place on the Rio team, ensuring it would be a very competitive field over the next few years.

As for the chances of his own appearance in Rio, Michael said it was too far away to commit to anything yet, especially as he was now a small business owner and the father of two young children.

He said the triathlon training offered a chance to stay fit, which staved off the debilitating effects leftover from his cancer and its treatment. It has now been five years since his diagnosis and he has been told he is in remission.

"It changed the way my body worked and I recover differently than before. I can't train the way I'd like to," he said. "I find when I'm quite fit, it masks the symptoms and I don't need a three-hour nap in the afternoon. I like to have the energy to play with my kids."

Caption: Milton emerges from the water after the 750m swim in 12th place in the open 35-39 class.