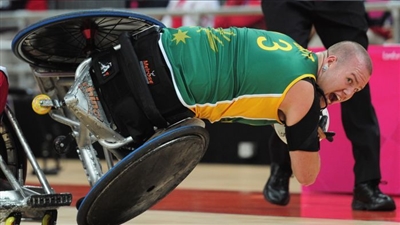 So, what were the highlights of the London Games for me? There are so many to choose from but I have narrowed it down to 12 (in no particular order).

ABC TV's coverage of the Games. I believe that, in the US, the most you could see was about an hour of the previous day's highlights. All credit to the ABC in Australia who bought us 100+hours of action including 8+ hours live each day.

Alex Zanardi. The former Formula 1 driver lost both legs above the knee in 2001. He dabbled in touring cars for a while and did some pretty awesome jobs modifying his cars but he has finally found his home at the Paralympic Games in the sport of hand cycling. He won two gold medals and a silver.

Team GB. Love them or loathe them, the home team put on quite a show, lead by David Weir who was simply unbeatable. Is he really that good or was he spurred on by that amazing home crowd? Both I'd say. Racing in the T54 wheelchair class against our own Kurt Fearnley, he took out the 800m, the 1500m and the 5000m on the track and stole the Paralympic title from Fearnley in the Marathon to end the Games a national hero. GB finished third on the medal tally behind juggernauts China and Russia. They won with style and were great ambassadors and motivators for their home country at a home Games.

Eshter Vergeer. The Dutch wheelchair tennis player took out her fourth Paralympic women's singles title with her 470th consecutive win. The last player to beat her was Australia's Daniela di Toro way back in 2003. Vergeer has been the world number one in her sport since 1999 and says that, at some point, she would like to be beaten because "... it would be good for the development of the sport." Awesome in so many ways!

Social media. The social media juggernaut has moved onward and upward since the 2008 Games in Beijing. Four years ago Facebook had 100 million users compared with over 900 million today, Twitter is up from 6 million to 140 million and applications like Instagram and Pinterest didn't even exist. Still, I'm blown away by some of the stats coming out. On day one of competition the official Games website recorded more hits than the whole of the Beijing Paralympic Games and, according to Nielsen, a staggering 12% of social media posts in the UK during Games time were about the Paralympics. And the athletes felt it too.T44 100m champion Jonnie Peacock, saw his fan numbers on Facebook grow by 3,258% and Oscar Pistorius added 30,000 followers. Social media is a huge opportunity for the Paralympic Games, for so long the poor country cousin to the Olympic Games when it came to traditional media coverage. With a direct and immediate link to fans, it (almost) hardly matters that NBC, the official London 2012 broadcaster in the US, gave the Paras no live coverage at all. Fans simply watched online.

Fifth time lucky . I was in awe of two Australian women in particular who show great persistence and dedication to their goal. The amazing Leisl Tesch won gold in the sailing after competing in five Paralympic Games in the wheelchair basketball team (winning two silver medals and a bronze). I'm sure she and teammate Daniel Fitzgibbon shed a few tears with the win coming days after the death of Leisl's mum. Congratulations and sympathy to a brave and determined athlete. Then there was wheelchair racer Christie Dawes who, after competing in five Paralympic Games, finally won her first individual medal - a bronze in the T54 5000m. It was impossible not to smile watching and listening to the frank and emotional Christie after the race. Good work girls!

Oscar Pistorius . He was beaten in the 400m and again in the 100m. I'm sure he was disappointed but you simply can't peak twice in just a few short weeks. I think his form was compromised by his Olympic ambitions. Then he got dirty at another competitor about the length of his legs and later apologised. But he dominated the 400m and the Paralympic and Olympic Games were both better for his presence. Hats off to Oscar and anyone else brave enough to challenge the status quo.

Winter athletes out of season. Jess Gallagher went to London with hopes of becoming the first Australian to win medals at both a winter and summer Paralympic Games. However, she didn't have a good competition, placing outside the top five in her two events: javelin and long jump. She is young though and will have another chance in Rio. Other winter athletes to do well include skier Allison Jones from the US who had already medalled in summer and winter sports before winning cycling gold in London to go with her gold from the 2006 winter Paralympic Games. Do you know of any other athletes who have medalled at both a winter and a summer Games?

SOLD OUT! If you believe the London organising committee, tickets for the Paralympic Games sold out. True or not, the good news is that the London Games had more bums on seats than any previous Games, beating Beijing by around 1 million tickets. With that news I was excited. After all, the Atlanta Games in 1996 was the first to actually SELL tickets. This news really was a Games highlight for me!

Steelers gold. On the last day of Paralympic competition, Australia's wheelchair rugby team graduated from bridesmaid to bride with a formidable finals win over Canada. They've won two silver medals (in 2000 and 2008), losing on both occasions to arch rivals US, and were determined to bring home the gold from London. Well done Steelers!