All is forgiven Eddie 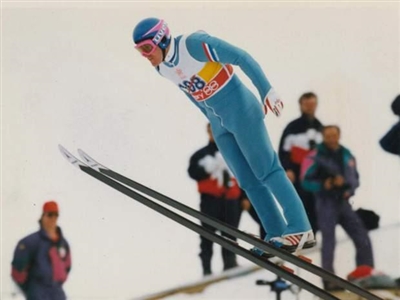 Who else is excited about the upcoming film Eddie the Eagle starring Hugh Jackman?

I was actually in Calgary for the Olympic Games in 1988. I was just 14 years old and I'd been to my very first winter Paralympic Games just six weeks earlier.  I finished 11th in the Giant Slalom which earned me the very last spot on a list of 13 skiers in my LW2 class to compete in a demonstration event at the Olympic Games.

Exciting times. I wore a borrowed uniform to march with the AustraIian team in the opening ceremony and sat for hours, freezing in the stands, with a cold wind at my back. That experience alone had a lasting effect: ever since I've dreaded each and every winter opening ceremony.

My sister, my mum and I stayed at the Chateau Lake Louise and went ice skating on the lake in the evenings. I ate potato skins and doughnuts which seemed so exotic and perfectly designed for a 14 year old boy.  I came a very respectable 11th in the Giant Slalom.

Watching ski jumpers always takes my breath away. I've watched the sport at some famous venues: the Bergeisel in Innsbruck, Austria; The Hollmenkollbakken in Oslo, Norway; and in Calgary. I was way too busy with preparation and racing and just having fun to take much notice of Eddie while I was actually in Calgary but I soon learned all about him.  I also met him when he visited Australia's ski resorts on a sponsored trip in 1991.

I didn't have much time for him as a 17 year old ski racer. I was a bit dirty at everyone for the way they lauded Eddie the Eagle. Seriously, the guy came last! I seemed to be the only one who could name Matti Nykänen from Finland who actually won two ski jumping events at the 1988 Olympic Games. It's a position I held throughout much of my skiing career: I always thought the winner was the one who deserved all the accolades.

However, as I get older, I realise that Eddie the Eagle's story is pretty interesting and unique and, if there's one thing people love, it's a great tale. I've learned that he was a pretty good ski racer before his ski jumping exploits catapulted him to international fame. He almost qualified for the 1984 Olympic Games Olympics for Great Britain. But the one thing that really endears him to me is that, like me, he's also tried speed skiing. He must be a good bloke although his 171kph PB is a little on the slow side!

So, Eddie the Eagle opens in Australia on Thursday 21 April and I will be one of the first to see it. I'm taking my kids as they both love a good story too.