Col a Veteran of Ride the Divide 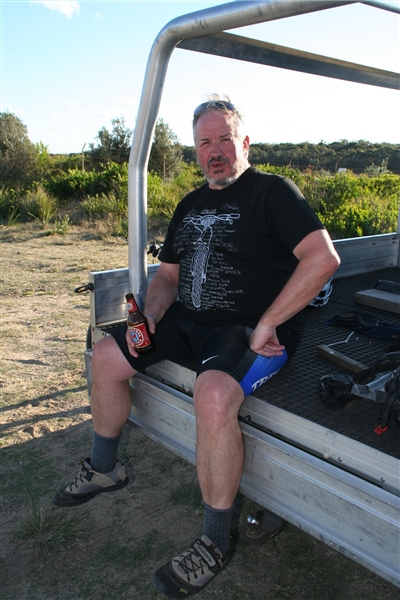 Col Shipard completed the inaugural Ride the Divide in September 2012. He was one of five riders.

"Getting to know Michael Milton over those two days was one of the highlights of the trip,"said Col.

"Ride the Divide was tough but I made it. I was the oldest one there but I pedaled every inch - even if my 135kg payload was assisted occasionally by a welcome (up hill) push from Michael.

"Reaching the ocean was a pretty proud moment and it was great to share it with my eldest son Sam as well."

Col enjoyed the 2012 Ride the Divide so much that he's keen to do it again on 4-5 May, this time driving the sag wagon.

"I've done it once on the bike and that's enough for now but I'd like to help others make the trip as well. It really was a lot of fun and the perspective Michael shares through his efforts in overcoming challenges is invaluable," said Col.

"The first Ride the Divide was such a blast with quite a bit of adventure thrown in. Col was great and so determined. I guess you'd call him a veteran since he's been on every Ride the Divide and is still coming back for more," laughed Milton.

Ride the Divide is on again! For more information go to the Big Foot Adventures website or call (02) 6230 0651 to book your place.

Photo: Col enjoys a hard-earned beer at the beach after two days riding the Divide from Canberra to the coast.