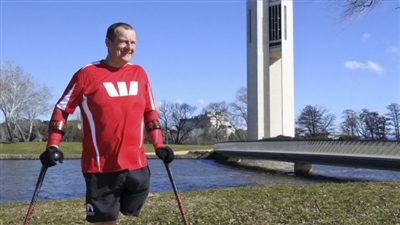 By The Canberra Times

Now Michael Milton has returned to the city where it all began to raise money for the Westpac Foundation at The Canberra Times Fun Run on September 4.

The Paralympic skier, cyclist and paratriathlete will take part in his third fun run in his home town, this time as the face of major sponsor Westpac.

He has come a long way since his first fun run when, just out of high school, he went sailboarding straight after the race and became extremely dehydrated.

"I could not move [the day after]; I was struggling to get out of bed," he laughed.

"I think it was a combination of the run and the dehydration. After being an elite athlete now for a long, long time I don't make those sort of stupid mistakes any more."

Since then, Milton has taken out six gold, three silver and two bronze medals as a skiier in the 1992, 1994, 2002 and 2006 Winter Paralympics, as well as joining the Australian cycling team at the 2008 Summer Paralympics.

On top of his Paralympic achievements, Milton has completed a marathon, walked the Kokoda Track twice, climbed Mount Kilimanjaro and competed in two world paratriathlon championships.

Milton is not yet sure whether he will take part in the full 14km run or opt for the 5km run with his children, however, he is hoping to recruit friends to join him.

He will be one of the faces of the Westpac Foundation on the day, helping to raise money for numerous not-for-profit organisations.

For him, the timing of this year's fun run just days before the 2016 Paralympic Games opening ceremony is both a blessing and a curse.

While watching the Olympics is cutting into his training schedule, he said the focus on sport and athletics ahead of the fun run would probably encourage more people to get active.

"Fun runs are great on so many levels; they bring the community together, they encourage people to be fit and healthy," he said. "I think this comes together to make The Canberra Times Fun Run a great event."

The Canberra Times Fun Run is on Sunday, September 4. Register at canberratimesfunrun.com.au.