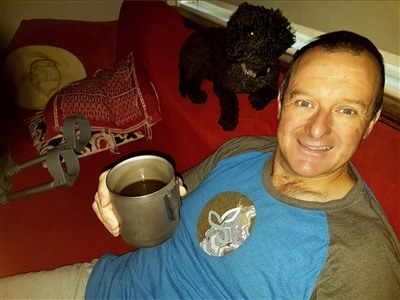 Australia's reputation on the sporting field is legendary but few are aware of our amazing talents off the field; more specifically, in endurance spectating!

There are few things more wonderful than settling back on your favourite lounge chair with a nice cool beverage (it's even warm enough in winter for a cold beer) to watch a good match-up. Rugby league, tennis and car racing are long-time favourites but there is one sport that puts them all in the shade - cricket.

It's our love of cricket that makes Australians world leaders in endurance spectating. A test match can last anywhere between two and five days and every summer there are at least five test matches to test our staying power.

That's a reasonable commitment for sports that are played at home and televised in normal waking hours but international sport presents a few challenges. The fact that Australia pretty much has its own dedicated timezone means we are between seven and 12 hours ahead of the rest of the world so the biggest international sporting events (think Wimbledon, Tour de France, World Cup and the Olympics) are pretty much televised at night.

But not this time!  Pyeongchang is a mere two hours behind us which means that, on this rare occasion, we can watch the winter Olympic Games live and still get a good six or seven hours of sleep.  Perth, a good seven hour flight from Sydney but still in Australia, is actually in the SAME TIMEZONE as Korea which means they are operating in REAL TIME. Be still my beating heart.

So, as we Australians settle into our favourite spot for some serious endurance spectating, our hearts go out to our fellow sport addicts on the other side of the world who are couch surfing ALL NIGHT and then going to work ALL DAY.

It's time to share some tried and tested tips for out-of-time zone spectating.

1.        Stay awake until it starts! I know you think a couple of hours sleep before competition begins is better than no sleep at all but YOU'RE WRONG! Getting out of bed in the middle of the night to watch TV is really tough. Harden up and stay up.

2.        Get a pillow and a few blankets and leave them on the lounge. Even if fellow residents ask you (nicely at first) to put them away, don't bother; you'll only have to get them out again. The couch is now your bed 24/7 for the duration. Make sure everyone you live with understands this.

3.        Set your alarm to L..O..U..D. Work out when your must-watch events are on and set the alarm. You WILL fall asleep during the figure skating (who wouldn't?) but you won't want to miss the Downhill. And, because your bed is now permanently on the lounge, you won't miss a thing. Hell, you don't even have to get up!

4.        Fill your Esky* full of drinks and snack food and keep it in the loungeroom. It may not seem like a good idea to drink and eat all night but remember you have to work tomorrow. You need to replace sleep with something and that something is sugar and fat!

5.        Find somewhere at work where you can sleep. Is there a sick bay, an empty office, a stationery cupboard, even a toilet cubicle where you can slip away to for a quick nap? I once knew a girl who took regular naps under her desk. No-one ever knew because they never looked down!  Let's face it; you won't be able to get through the whole Games without SOME sleep. Much better to do it at work than waste valuable couch surfing time at home.

6.        Make friends with other endurance spectators at work. Obviously, you'll need other people to review the previous night's action with but, more importantly, you can cover for each other in those crucial sleeping-on-the-toilet times.

7.        All elite athletes know that recovery time is vital. The same is true for elite spectators. Take a night or two off mid-Games to ensure you're at your best towards the end. After all, you do not want to sleep through the Ice Hockey final!

So, enjoy the Olympics my nocturnal friends. See you on the other side!

*An Australian portable cooler used all year round to keep stuff cool.

Caption: A cup of tea and a dog for company. It's all I need for an all-night spectating session.