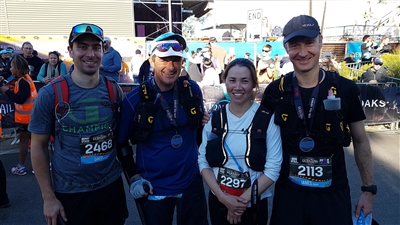 The five-time Paralympian and world record holder and his three fellow runners crossed the line at just after 3pm, with a course time of 04:58:55. It was a far different story to last year's 50km effort which saw Milton running for more than 10 hours.

"Last year was a real slog for the second half. That sort of distance takes a lot out of you - physically and mentally. However, I think I under-prepared for this year's event, got a little cocky you know, having done 50 last year. I feel worse than expected," said Milton.

He was under pressure to finish in around five hours as he had an appointment he just had to make: the screening of a film about his 2017 50km race at the Trails in Motion Film Festival at the Fairmont Resort in Leura.

"I was doing the introduction. There's nothing like a previous commitment to get you moving up the 951 Ferber Steps at the finish. I made it to the screening... just," said Milton with a laugh.

He made a point of mentioning his running mates James Crook, Alicia Crook and Dave Barbolet.

"We all do the hard yards but I get the kudos. This sort of race is tough to do alone. You need the support of friends to get you through the tough parts, to spur you on, to chat and laugh along the way. 22km would be so much further without friends along for the ride."

The Ultra-Trail Australia event attracts competitors from all over the world to run the UTA 100km, UTA 50km, the Pace 22km races and two shorter events.  Over 4500 racers plus spectators descend (or ascend) on the Blue Mountains for the four day endurance running festival.