THE ROAD TO ROME 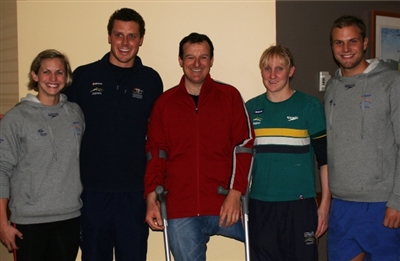 BEFORE the Australian Swim Team left home bound for the World Championships in Rome, they spent some time with Michael Milton during their last Canberra camp.

Michael was invited to speak to the group by Head Coach Alan Thompson who believed his story would inspire the athletes heading off to a major meet.

Michael shared some of his experiences competing at an international level and told stories about being an elite athlete with one leg.

"It's always such an honour to be asked to speak to a group of athletes from another sport. It unnerves me though, moreso than talking to a room full of 500 corporate executives," said Michael, laughing. "I'm following their results in Rome and hoping I may have had a tiny little bit of influence on them."