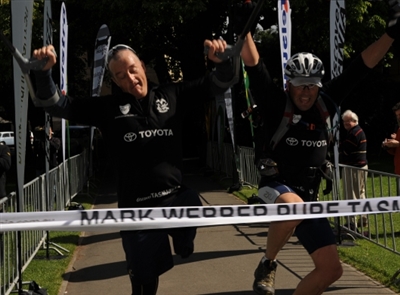 MICHAEL competed in the November 2008 Mark Webber Pure Tasmania Challenge which raised $250,000 for the Leukaemia Foundation and almost $60,000 for the Save the Tassie Devil Appeal.

He and partner Tony Bond became Team Toyota and completed the 250km, five day adventure race along with 66 other competitors. A one-hour special went to air on Channel Ten in April and is often repeated on One HD.

News that the event would not be held in 2009 is disappointing but Michael and Tony are hoping to do some more adventure races soon.

"We had a great time. It was a lot of fun although it was a huge challenge most days, especially the running legs. It was wonderful to hear about the amount of funds raised and I am really proud I was involved.

"I was saddened to hear the event was off for 2009 but the concept and the event are fantastic and I hope it will be on again next year. I'm definitely up for the challenge again."

Photo: Michael and Tony celebrating crossing the line with a Toyota leap!