SWAPPING WHEELS FOR SKIS IN JINDABYNE 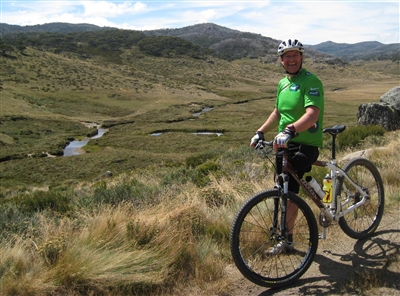 Michael made his annual pilgrimage to Jindabyne recently to take part in a weekend of cycling that he first organised for his Canberra club in 2007.

The weekend generally attracts 15-30 cyclists who take part in a number of informal and competitive rides over the three days. This year the program included a ride to Charlottes Pass and back, one of the longest and steepest rides in Australia.

"It's a great weekend with lots of sweat and laughter. Most people just brought their road bikes but a couple of us did some mountain biking also.

"It was a wonderful opportunity to do some serious riding in an amazing environment. It's a fairly tough program for those who choose to do it all but riders can pick and choose. We even do some track cycling on the last day and it can get pretty competitive," said Michael.

A committed cyclist himself, Michael only became serious about the sport in 2006 after his retirement from ski racing. He found a coach and was selected in the Australian team to compete at the 2008 Beijing Paralympic Games where he finished in the top ten on the track and also raced in the road event.

"I've always been a keen cyclist but I learned a lot in a short space of time when I decided to race and go for Beijing. I joined the Vikings Cycling Club as a rookie and now I am one of the most experienced cyclists. I really enjoy the chance to organise a weekend like this for my friends and to give something back to a group of people who were so supportive of my cycling career," said Michael.

He was quick to point out that anyone is welcome to join them on their annual trip to Jindabyne.

"We have loads of beds, it's really cheap and we all pitch in with food. We have some incredible meals after a long day's cycling. It's awesome and we're happy for any keen cyclists to come along."