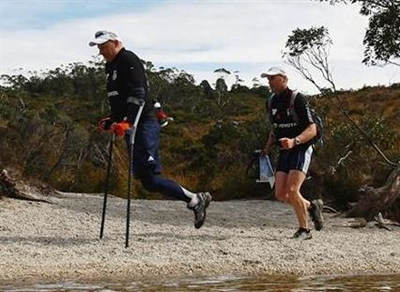 In November 2008 Michael and his friend Tony Bond competed as Team Toyota in the Mark Webber Pure Tasmania Challenge, a 250km long five day adventure race through some of Tasmania's world famous wilderness.

The race included mountain-biking, kayaking and trail-running legs. Team Toyota's longest day was almost ten hours of racing, including a run up Cradle Mountain. Both men said it was a once-in-a-lifetime experience and would gladly do it again - even with each other!

Photo: Team Toyota strides out on day one