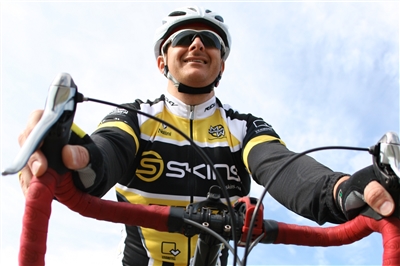 Michael joined 7000 cyclists in Adelaide in January to ride the fourth stage of the Tour Down Under.

He rode as part of the 120-strong Cancer Voices SA, the biggest team to enter the 155km long community cycling event, the Mutual Community Challenge, held one day prior to the officila race start.

Organised by Ashleigh Moore, a man who has battled tonsil, tongue and neck cancer, said the team was excited about Michael joining them.

"It was great to have Michael on board. He is not only an amazing cancer survivor but also an experienced cyclist," said Moore.

"I really enjoyed the ride," said Milton who battled bone cancer as a child and then oesophageal cancer in 2007. "It was great to see so many people riding together in a unified battle against the disease."

Cancer Voices SA was launched in 2007 to raise a voice for those affected by cancer.

"It's a reflection of what's going on in the community. Everybody knows someone affected by cancer.''

For more information about Cancer Voices SA, go to http://www.cancervoicessa.org.au