IT'S OFFICIAL - MILTO'S OFF TO BEIJING! 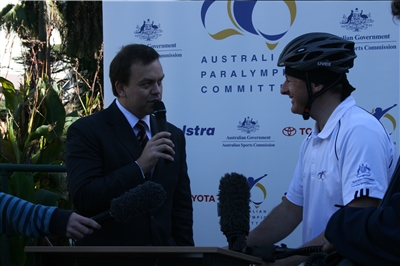 Friday 27 June 2008, Sydney: Michael Milton can pack his bags for Beijing after his place on the Australian Cycling team to compete at the 2008 paralympic Games was confirmed today.

The Australian Paralympic Committee officially announced the team at their Homebush offices, following Cycling Australia's nomination of the 18 athletes earlier this month.

No appeals for the men's team were received but one place on the women's team is still undecided, pending the outcome of an appeal.

'Nothing's ever certain until the final announcement and it was great to hear my name read out today. I am so pleased to be going and so glad to be well enough to compete. I feel my life is getting back on track,' said Milton.

Diagnosed with oesophageal cancer less than 12 months ago, Milton received radiation treatment and chemotherapy before major surgery in September to remove his oesphagus and two-thirds of his stomach.

At the time he had been selected for the Australian cycling team to compete in the Para-Cycling World Championships Team but was forced to pull out to literally fight for his life.

The Beijing Paralympic games will be Milton's sixth but his first as a summer athlete. His ski racing career culminated in 11 Paralympic medals (six of them gold) and a host of other international titles. He also holds the record for the fastest Australian skier.