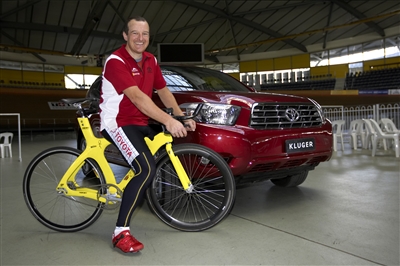 Friday 23 May 2008: Michael Milton arrived in Adelaide this morning ahead of this weekend's Paralympic cycling trials, his last chance to post a team qualifying time.

Milton says his preparation for the race has not been good but he is hopeful selectors will recognise his potential. Four weeks ago he recorded a personal best time in the 3000m Pursuit.

'I backed up with a couple of tough road races in the days following that race and probably overdid it as it's taken me a month to recover.

'I'm still trying to find the right balance and feeling stronger each day and I hope the selectors recognise my potential for rapid improvement. By September in Beijing, I expect to be in top form and maybe even an outside medal chance,' Milton explained.

He was diagnosed with Oesophageal Cancer last July. He had chemortherapy and radiotherapy, followed by major surgery but was back on his bike barely a month later.

'In some ways that sounds more amazing than it was. I think I managed to ride around the block,' said Milton with a grin.

The cycling team to compete at the 2008 Beijing Paralympic Games will be announced in June.

'I was getting ready for the World Para-Cycling Championships in France when I got sick and was diagnosed. It's been such a tough journey since then and competing in Beijing would be a real milestone,' said Milton.

He races twice on Saturday - in the 3000m Pursuit and the 1km Time Trial.