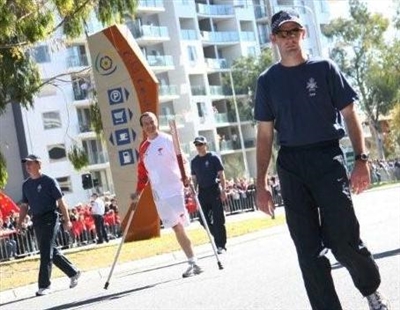 Michael carried the Beijing Olympic Torch through the business centre of Canberra on Thursday, accompanied by the cheering of crowds that in some places stood ten deep.

The multi-medal winning Paralympian is a popular identity in his home town and thousands of office workers came out to see him run along Northbourne Ave, about 2km from where the cauldron was lit by Ian Thorpe.

There were some Tibetan protesters and many Chinese supporters on Michael's leg of the relay but no trouble. Milton says he never felt theatened.

'ACT Policing did a great job. At no point did I feel unsafe. After all the trouble in other cities around the world and talk of relay boycotts, it was great to see so many people there enjoying the day,' said Milton.

He and his family then moved on to the farewell concert where his wife Penni was singing with the 500-strong Torch Relay Choir.

'I hope this is not the last international Olympic torch relay. It would be such a shame to loose the opportunity for such community celebration. It was a great day in Canberra,' said Milton.