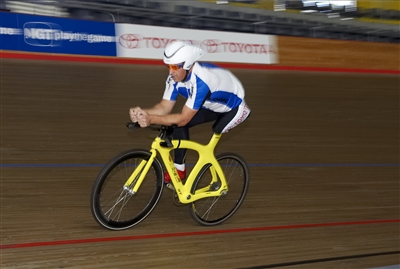 Toyota News Release, Wednesday 23 April 2008: Paralympic skier-turned-cyclist Michael Milton is quietly confident he can win a ticket to ride in Beijing after posting a personal best in qualifying trials this week.

During two days of Paralympic cycling team trials at Sydney's Dunc Gray Velodrome, the Toyota ambassador posted an all-time personal best of 4:07.5 in his event, the 3000m Pursuit.

His previous personal best was 4:11.69 - an Australian record - which he set in February last year just four months before his training and his life were cruelly disrupted by the diagnosis of oesophageal cancer.

One month after radiation, chemotherapy and radical surgery, he started riding again and in February this year he won two gold medals at the 2008 Australian Track Cycling Championships.

'My best then was 4:13.5, so this is effectively a six-second PB, which is exciting, but it's just six of the 12 seconds that I need as a qualifier to definitely get me into the Games.

'At the moment, depending on how you look at it, I could be ranked seventh, eighth or ninth, based on that 4:07. There are eight spots in the team but that covers different athletes in different events, anything from 200m to 4000m and different categories of disability, which is why it's difficult to put a definite ranking on where I stand.

'If I could lose three of those six seconds, I could see myself moving up a spot or two and into greater certainty for a spot on the team.'

The countdown is now on to the final selection trials in Adelaide on May 24, with Milton admitting the cooler weather will make for a slower track, and a bigger challenge to cut his times.

'It's certainly very different to my skiing career, when I was always the first one picked for the team. It was all about the Games and I never really thought about selection.

'This time around, the fight is not about how I will perform at the Games but whether I make the Australian team - and if you do make the team, you're expected to come home with hardware.

'But I am in the hunt. From where I was at on January 5, which was my first track session back from cancer, this is great and I'm really happy about being at this point.

'I am really happy with my improvement and how I am performing and I do believe I am still in there with a shot. A month ago I thought I had a five to 10 per cent chance whereas now I would put that up to 20 to 30 per cent.

'But I also believe that I haven't put the perfect run together. Every time I run, there's something that can be improved, either with my health or the race tactics or the equipment or whatever. I'm confident if I can put it together, it will be a good one, but there is only one more shot.

'So I really do need to put it all together - or have some of the others fall by the wayside!' he laughs. 'That's not my preference but it's always an option!'

Milton will now meet with coach John Armstrong and work out what can be done between now and May 24, in terms of tweaking everything that could produce the result they want.

'It is about elite sport and to qualify, you have to post elite level times. Until this week, I hadn't done one. That time would probably have won me a bronze medal at the Paralympic Games in Sydney, but the sport is moving forward and I need to go faster.'

Milton lost his left leg to bone cancer at the age of nine before going on to win 11 Paralympic medals and 11 World Championship medals in ski racing. He then took up speed skiing, setting a world record as the fastest skier with a disability - and the fastest Australian skier ever - with a run of 213.65kmh.

After that came 'retirement' and the switch to competition cycling.

The world record for Milton's event is 3:56.349 held by Laurent Thirionet of France. Milton is aiming for under four minutes by the time the Beijing Games start.