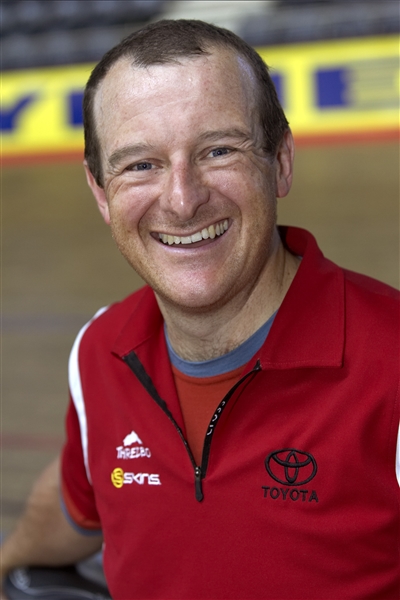 Thursday 17 April 2008: TWO days out from the second round of Australian cycling team trials, Michael is hoping his health will hold out long enough to run a time that may see him compete in Beijing.

Training at the Dunc Gray Velodrome in Sydney, Michael surprised even himself with times that may see him shave up to six seconds off his PB and put him within reach of the best cyclists in his class in the world.

Ill health three weeks ago in the lead-up to the Adelaide trials saw Michael post disappointing times, a long way out from the qualification times he needed to be even considered for the Australian team.

'My health is still random but I am learning to manage it better, learning what foods upset me and how much rest I need. It's certainly not an exact science though and, although I feel OK right now, there are no guarantees that will last for another four days,' explained Milton.

He has three chances on Sunday and Monday to post good results in the 3000m Pursuit. After that there remains only one last trial on 24 May. However, as the weather cools down the track slows so, realistically, this weekend represents his best chance.

'It's a shame because I know I would be fitter next month. I'm racing against time, balancing my health with my fitness, doing as much as I can. Sometimes I get the balance wrong but this week it's working and I hope it lasts,' said an excited Milton.