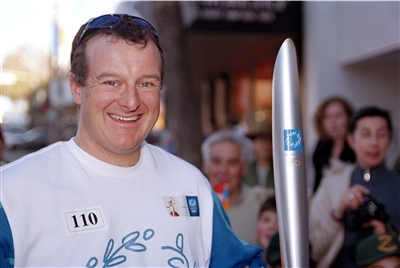 Michael Milton will carry the Olympic flame when it comes to Canberra on Thursday 24 April.

As one of two Olympic Torch Bearers chosen by the Canberra community, Michael was part of the celebrations to mark the Chinese New Year in Canberra.

'I was the second last bearer. Louise Savauge took the flame from me and lit the torch. I will never forget the feeling of being in that stadium with 10,000 people cheering and screaming. It was a proud moment to have the Paralympic Games on home soil,' explained Milton.

Milton's wife Penni is also involved in the torch relay as part of a 500-strong choir that will accompany the flame on its journey through Canberra.

Photo: Michael Milton carried the Athens torch as it made its way through Sydney in 2004.