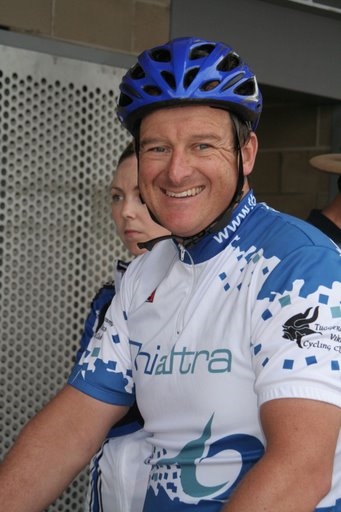 Cycling Australia in conjunction with the Australian Paralympic Committee determines the qualification criteria for the Australian team. The published times are based on medal-winning performances in each class at the 2007 World Para-Cycling Championships.

Recording a qualifying time simply makes a cyclist eligible for Australian team selection. It does not guarantee a place on the team. The final team is chosen by a selection panel and announced in July.

There are just seven places for male cyclists on the Australian team and more than 15 vying for selection.

What Michael needs to do…

Michael's best chance to make the Australian cycling team for the 2008 Beijing Paralympic Games in September lies in the 3000m Pursuit.

Why? Because the 3000m Pursuit for LC3 men is a stand alone event as opposed to the 1km Time Trial which is a combined event for LC3 and LC4 classes. Greg Ball from Queensland holds the world record in the LC4 class for the 1km Time Trial and would be a clear choice for that event over Michael.

'I am very new to the sport and my health and fitness is improving all the time so neither my coach nor I are at all sure what I am capable of. Who knows, perhaps I can make up that 12 seconds.'

'To go 12 seconds faster over 12 laps is a huge call but my times on the Canberra track have improved a lot recently.'

'I am still getting used to my new bike which I only got in January and I have a new "stump bucket" which will make a difference.'

'My coach and I have made a few strategic changes lately (all secret) which seem to be paying off.'

Photo by Nancy Morrison: Milton admits making the Australian Paralympic cycling team is a long shot... but he will be 'a very happy man' if he makes it.