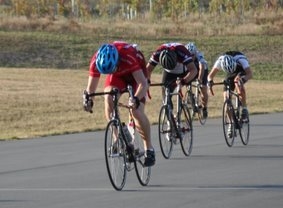 WEDNESDAY 26 MARCH 2008: With trials for the 2008 Paralympic Cycling Team now just three days away, Michael Milton has been forced to swap training for bed rest and it seems unlikely he will be able to post a qualifying time in Adelaide.

Milton, who was treated for Oesophagael Cancer last year, is recovering from a massive operation to remove his oesophagus and most of his stomach. Digestive problems and exhaustion still hamper his recovery.

'Every few weeks I seem to run out of steam and just have to give up training and go to bed. It's a real setback every time and extremely discouraging.

'Overall my health continues to improve and these "episodes" are becoming less frequent but, on this occasion, my body's timing couldn't be worse,' said a frustrated Milton.

He admits he is racing against time to qualify for the Australian cycling team.

'I wasn't realistically aiming to run a qualifier this weekend but who knows what's possible when I'm feeling good. A week ago I was clocking some unexpectedly fast laps during training and really looking forward to the trials. Now I just want to feel well enough to get on the bike.

'There are two more scheduled trials in April and May. However, I believe I wont be back to full fitness until July. That will be perfect timing for the Games but too late to qualify,' Milton explained.

The dogged skier-turned-cyclist who competed in five winter Paralympic Games and won 22 international medals (12 of them gold) set his sights on a cycling spot almost two years ago and was on track for success when cancer struck.

Cycling Australia and the Australian Paralympic Committee have applied to the International Cycling Federation for a wildcard entry to the Paralympic Games on Milton's behalf. This weekend he will learn if that bid was successful.

Photo by Nancy Morrison: Milton pushes for the line to take second place in a local criterium race in Canberra during March. With Australian team trials now days away, Milton needs to regain his strength.