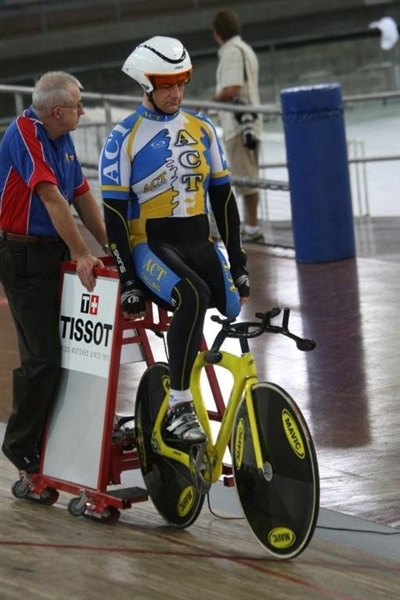 WEDNESDAY 6 FEBRUARY: Skier-turned-cyclist, Michael Milton, launched his comeback this week at the Australian Track Cycling Championships by winning both the 1km time trial and the 3000m pursuit.

Diagnosed with Oesophagael Cancer just seven months ago, Milton had chemotherapy and radiotherapy followed by major surgery to remove his oesophagus and most of his stomach. Less than one month later he was back on the bike, determined to regain his fitness as quickly as possible.

In February 2007 Milton competed in the same competition, his first national track cycling meet since retiring from skiing. His times this week (1:23.07 for the 1km time trial and 4:13.95 in the 3000m pursuit) were an improvement on last year's results and a good confidence boost. He now has until April to post times that will make him eligible for selection in the Australian team.

'Cycling is an incredibly competitive sport. There are around 15 male cyclists vying for the seven spots and four of those are already world record holders. I know I'm still an outside chance but I can see more potential after this week.

'Even if I don't make it, working toward that goal has been great for my recovery,' said Milton.

Michael Milton is sponsored by Toyota Australia, Skins Compression Garments and reACT Roofing and supported by the Australian Institute of Sport and the ACT Academy of Sport.

Photo: Milton prepares for teh start of the 3000m Pursuit.