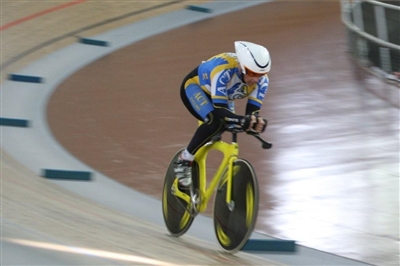 Michael has always loved cycling. As a skier, it was an important part of his off-season training. Until recently, he even had a special fold-up bike that he could take travelling.

Michael and his skiing coach Steve once rode their bikes from Brisbane to Sydney and, in 2002, after he returned to Australia following the Salt Lake Paralympic Games, Michael 'took a break' and cycled from Canberra to Warnambool via the Great Ocean Road.

Twice he has taken part in Round the Bay in a Day, a 200km recreational ride around Melbourne's Port Phillip Bay and is keen to do it again.

Less than six months after competing in his last Paralympic Games as a skier, Michael was back in the chase for Paralympic gold, this time on a bike. He found a coach, put a program together and started to train.

Michael chalked up successes quickly, winning a gold medal in the 3000m Individual Pursuit at the 2007 Australian Track Cycling Championships and breaking the Australian Record. He also won silver in the 1km Time Trial.

As a result, Michael was selected in the Australian team to compete at the Para-Cycling World Championships in France in August 2007.

It was a tough decision to pull out of the team but Michael had been feeling unwell for some time. Within weeks, he was diagnosed with Oesophageal Cancer.

Almost two months of radiotherapy and chemotherapy was followed by radical surgery to remove two-thirds of his stomach and all of his oesophagus, along with the tumour. The results were good and his surgeon was confident the cancer was gone but he faced a long and challenging recovery.

Back in the race

Less than a month after major surgery, Michael was back on his bike although he could only manage a lap of the block in his home town of Canberra. But he persevered and was soon thinking once again about Beijing and the Paralympic Games.

At the 2008 Australian Track Cycling Championships he raced again in the 1km Time Trial and the 3000m Pursuit, winning gold in both. His times in the two events were comparable to his results in the same events 12 months ago.

Three team trials were held in as many months and Michael bettered his PB for the 3000m Pursuit by six seconds, recording 4:07.535. Although not an automatic qualifier, Michael was still in with a chance of being selected in the Australian team for the 2008 Beijing Paralympic Games.

On 6 June Cycling Australia announced their intention to nominate Michael Milton for one of the team spots. On 1 September, less than 12 months since his operation, Michael arrived in Beijing.

He competed in the Individual Pursuit and the Time Trial on the track and in the 60.5km Road Race. He finished with two top ten finishes on the track. To read more about his results and his Beijing experience go to the news section or read his Beijing Blog.