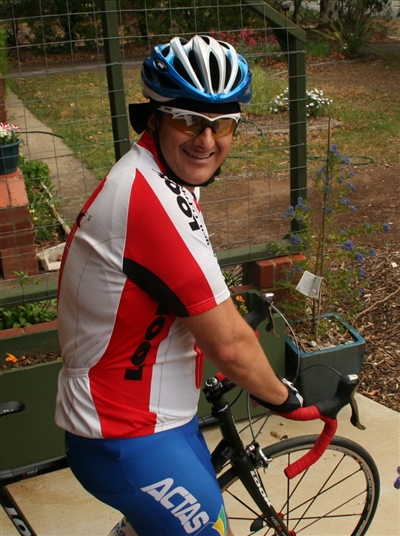 NOVEMBER 2007: Eight weeks since Michael's surgery for Oesophageal Cancer and his recovery is gathering pace.

Although riding on and off for about five weeks, it's only been the last week that he's been able to manage longer distances and he can finally feel his fitness increasing. Last week he rode in the morning and then backed up with his first race that night. He paid for it for a few days afterward (or it could have been the celebratory Indian feed he had) but he finished in the pack which is an important milestone.

Michael still has bad days but they are fewer and further between. Generally unwell in the middle of the day, he also feels worse after eating so there's still a way to go. It was such a major operation that the physical recovery will take a long time and he may always have problems with his digestive system. Staying nutritionally healthy and hydrated (particularly when he is training and even moreso when he's competing) will be an ongoing challenge.

He has his eyes firmly set on the Australian Track Championships in Sydney in February on his way to (hopefully) qualify for the Beijing Paralympic Games. The pressure is on to get healthy and fit enough to not only survive but perform. The upshot is he will have to better his PB by quite a bit to make it.

The surgeon is happy with his progress and says all his symptoms are normal. His vocal chords seem to have been damaged during the operation but everyone is confident they will heal over time. If it goes on too much longer, he will have to see an ENT specialist.

We're hoping Michael will rejoin the speaking circuit around February 2008 but, for the moment, we are just enjoying being at home, focussing on Michael's recovery and spending time together as a family.