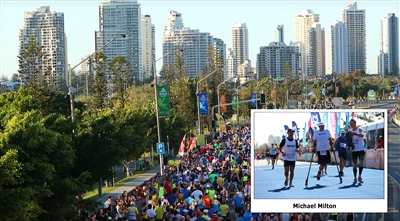 The idea to run a marathon had been in the back of Michael's mind for some time. Having run in the City to Surf and the Canberra Fun Run in 2012, he decided to test his limits with a longer run - the Canberra Half Marathon in May 2013.

After running a respectable time of 2 hours 47 minutes for the 21.1km race, Milton said he "... felt okay. A marathon might just be possible."

A quick look online confirmed that the current Guinness World Record for the fastest marathon on crutches (one leg) stood at 6 hours, 42:47.

"The pace won't be a problem, as long as I can finish the race," said Milton.

On Sunday 7 July 2013, Milton lined up at the start of the Gold Coast Airport Marathon. Alongside him were his friends Steve and Sharky who had agreed to be his support runners. A third, George, would swap in for Steve at the 20km mark, providing fresh support for the second half.

In order to beat the existing record, Milton and his support runners knew he would have to hold an average pace of around 7 minutes 30 seconds per kilometre. His pace for the first five kilometres was around two minutes quicker.

After 5 hours, 23:30, Milton crossed the finish line, having smashed the old world record by almost 80 minutes. Exhausted and with blistered hands, he collapsed into a wheelchair with marathon legend Rob de Castella by his side.

The Guiness World Record for the fastest marathon on cruches (one leg) is yet to be ratified but Milton says the record is secondary to just competing the gruelling race.

"It was never really about the record. I always knew that I could set a good pace as long as I survived the distance," he said after the race.

"At a function the other day Deeks said that marathons aren't fun. I know now, from personal experience that he was right. I am so glad I did it though," said Milton.

He praised his support crew and all those who cheered him on both on the course and off.

"There were people cheering and clapping along the whole course. They really spurred me on. There was a guy running behind me called Michael and I think he really appreciated it as well."