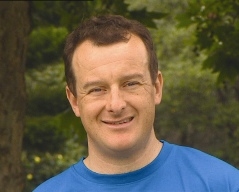 Austcare's television advertisement featuring Michael has generated over $13000 in donations for the world humanitarian aid organisation.

The commercial has received a lot of free airtime from all the major networks, with friends and family regularly reporting seeing it during prime-time shows.

'It's not just about raising money although we have been thrilled with the results. The primary goal was always to increase the general public's awareness of Austcareand the work we do.

'Michael became an ambassador in 2006 and has been a wonderful supporter ever since,' said Elektra.