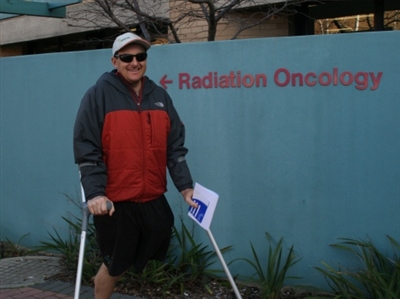 Michael Milton was diagnosed with Oesophageal Cancer on Friday 6 July 2007. It was a huge shock to Michael and his family and the initial prognosis was not good. With a 35% survival rate, Oesophagael Cancer in one of the world's deadliest.

Michael received chemotherapy and radiotherapy in July/August and had radical surgery in September 2007. The results were extremely positive and, although he wont be officially cancer-free until the five year mark, Michael is now in remission.

His recovery continues. He is often unwell and fatigue is still a problem but he is generally in reasonable health. He continues to challenge himself physically in the hope that continuing fitness will keep the cancer at bay.

Photo: Michael leaves the hospital in Canberra after his last radiation session in August 2007.

TUESDAY 27 MAY 2008: This will be the last update on this cancer page. From now on information about my ongoing reco...
Read More

(From wife Penni)
TUESDAY 11 MARCH 2008: I am writing this update because Michael is training this morning....
Read More

Thumbs up as Milton checks out

Milton celebrates one week since surgery

SATURDAY 6 OCTOBER 2007: Just one week since surgery to remove his opesophagus and the tumour within, Michael is rec...
Read More

THURSDAY 4 OCTOBER 2007: Michael is in good spirits and recovering well from surgery to remove his oesophagus. ...
Read More

Michael's surgery for Oesophageal Cancer has been postponed until Saturday 29 September.
Michael, his wife ...
Read More

Michael's surgery has been delayed until Thursday 27 September.
Read More

Michael's surgery for Oesophageal Cancer is scheduled for Saturday 22 September in Sydney.
He will spend up...
Read More

Just over two weeks since the end of Michael's radiation treatment finished and, as expected, he is beginning to fee...
Read More

An update from Michael

FRIDAY 3 AUGUST 2007: First of all I need to apologise for not replying to all the emails and phone calls and letter...
Read More

TUESDAY 31 JULY 2007: Michael finished the chemotherapy on the weekend and is now almost halfway through the radioth...
Read More