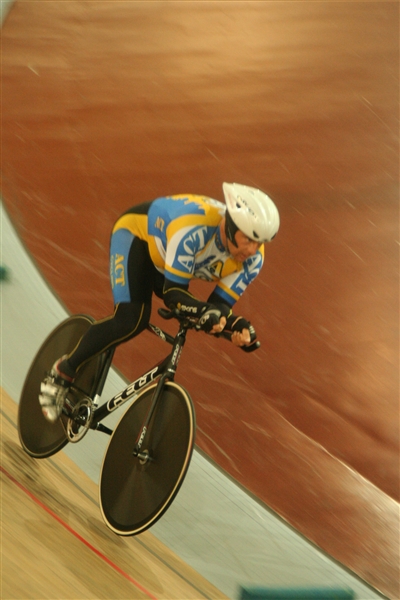 He's vowed to return to the mountain tops again, but skier-turned-cyclist Michael Milton is focused on his one chance to peak in his new pursuit.

Milton won six gold, three silver and two bronze medals in a skiing career that spanned five winter Paralympics, but the 34-year-old is a step closer to making his summer debut at the Beijing Paralympics next year as a track cyclist.

Less than a year after he first rode on a velodrome, Milton has made the Australian team to contest the Para-Cycling [sic] world championships in France in August. Cycling was once his hobby, but Milton now drives all his energy into his right pedal, his only pedal, knowing this is his last shot.

Concentrating on the 3000m pursuit, Milton was encouraged when he set an Australian record of 4min 11sec at the national championships in February. But Milton said he expected Australian selectors to cull the world championship team of 21 to about 15 for the Beijing Paralympics. In his bid for Beijing gold Milton is aiming at the world record of 3min 56sec.

"I would expect if I ramped things up I'd be five or six seconds faster now than I was at the nationals,"Milton said. "That would be the ideal situation, to be knocking on the door of a world record [in Beijing], but it's too early to tell."

Milton is already the fastest Australian on snow. His record of 213.65km/h was set in France 14 months ago. He will return to speed-skiing in 2009. Until then, the closest he will come to ice is the cement track of the Narrabundah velodrome.

"It's not an ideal training venue,"Milton said. "But when you're out there in winter, it's windy and the track is bumpy, it's a tough training environment and that makes tough athletes. Then when we go up to Sydney every couple of weeks to train on the Olympic velodrome, it's warm, it's indoors and it's so smooth, it feels like you're flying."

Milton confessed he was still a cycling novice, but he said his technique was quickly improving.

"When I started I was using my strength, my raw power, to slam down on the pedal and thrash around a bit. I was almost pedalling in a rectangular motion. To be efficient you need to have a smoother round motion. I guess I'm like a rectangle with round edges," he said, laughing.

An athlete who lives for adrenalin, Milton said he had found an alternative to the rush of skiing.

"The feeling when you're grinding a big gear and driving down the steep bank on the velodrome is awesome," he said. "I love them both."