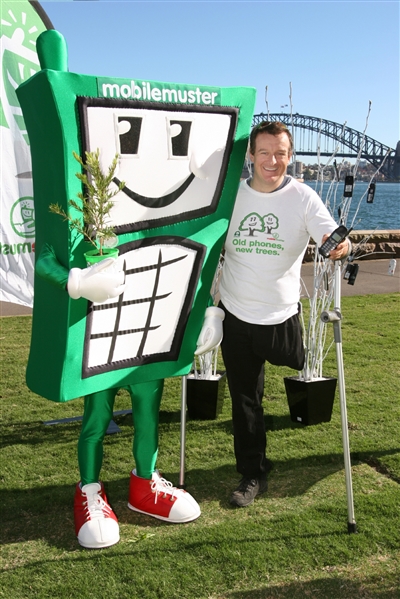 WEDNESDAY 23 MAY, DARLING HARBOUR: Michael Milton urged everyone to recycle their old mobile phones today in a campaign that could see up to 100,000 native trees planted across the country.

MobileMuster is the official recycling program of the mobile phone industry and, in partnership with Landcare Australia, a native tree will be planted for every mobile phone handed in for recycling between now and the end of June 2007.

"I am tough on my mobile telephones so I go through quite a few. I didn't give much thought as to where old phones end up until today but I will definitely be recycling now. We are such huge consumers of this technology and it's great to know that we can limit the negative impact in some way," said Milton.

The initiative is the first time anywhere in the world that a national mobile telecommunications industry has partnered with an environment group, to voluntarily initiate and fund a national mobile phone recycling and tree planting campaign. If successful the additional trees are estimated to offset the equivalent of 15,000 tonnes of carbon emissions or take 5,000 cars off the road.

"Old Phones, New Trees" is designed to tackle the estimated 15.5 million stockpile of old and unused mobile phones lying around at home in cupboards and drawers. If they end up in landfill, small amounts of potentially hazardous substances such as lead or cadmium could be released into the environment.

The Old Phones, New Trees campaign will deliver a win-win for the environment. If people choose to recycle their old mobile phones, over 90% of the plastics and metals can be turned into new products like jewellery, stainless steel and plastic fence posts.

To locate your nearest MobileMuster drop-off point or for further information visit www.mobilemuster.com.au or contact 1300 730 070.

Key mobile phone recycling facts:
- Australians upgrade or exchange their mobile phones every 18 to 24 months. There are approximately 15.5 million old mobile phones cluttering people's homes and offices across Australia, of which about 4 million no longer work
- Three out of four people have at least one old unused mobile phone at home. Nearly four out of 10 people have at least two or more old unused mobile phones at home that could be recycled
- Over 90% of the plastics and metals recovered during recycling can be turned into new products like jewellery, stainless steel products, batteries and plastic fence posts
- Mobile phones are not biodegradable and contain small amounts of potentially hazardous
substances such as cadmium in NiCad batteries which if not managed properly
can harm the environment
- By recycling mobile phones, more than 90% of the mobile phone product materials can be extracted and reused such as plastics, gold, silver, copper and nickel
- 8.7 million handsets were shipped into Australia in 2006
- 419 tonnes of handsets, batteries and accessories have been collected since the recycling program was initiated by AMTA in late 1999. This includes 2.45 million batteries and handsets (figures current at 31 March 2007)
- One tonne of mobile phone circuits can yield the same amount of precious metals as 110 tonnes of gold ore, 123 tonnes of silver bearing ore and 11 tonnes of copper sulphide ore
- MobileMuster is the only whole of industry led electronic product recycling program in the world and is funded by handset and accessory manufacturers Nokia, Motorola, Samsung Electronics, LG Electronics, Sagem, Sharp, NEC, Panasonic, I-Mate, Force Technology and network carriers Telstra, Optus, Vodafone, 3 Mobile, Virgin Mobile and AAPT