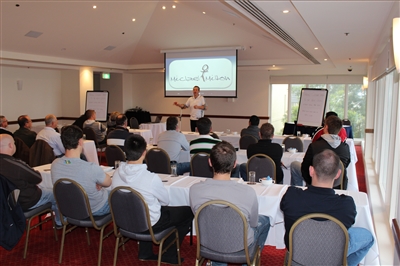 The Toyota Dealership in Dubbo celebrated winning the 2010 Presidents Award with a weekend away in the Blue Mountains for all staff and partners.

The highlight of the weekend was a presentation over breakfast by Michael Milton who has been sponsored by Toyota Australia since 2002.

"Michael's will to achieve no matter what the challenges he faced was inspirational, we all could learn a lot in the way he keeps picking himself up and succeeding at the highest level," said Brian Haling after the session.

"Very inspirational, very interesting. A great speaker, I had seen a programme on pay about him and it was great to see him in real life. Puts things back into perspective that things aren't always that bad and could be a lot worse. A genuine great Aussie hero who hasn't let his reputation go to his head."

The Presidents Award for Excellence is achieved over a 12 month period and based on a points system that rewards excellence in six disciplines including sales, service, parts, customer satisfaction, business management and facilities.
Michael Milton works as a professional motivational speaker, addressing more than 10,000 people every year, many of them from the corporate and business sectors.