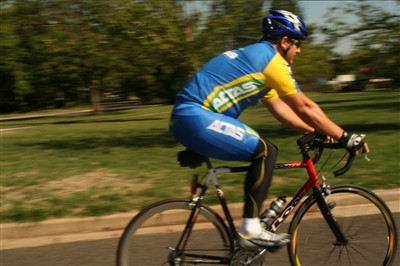 Wed 28/3/07: Michael Milton will compete in his second major cycling meet this weekend just eight months after taking up the sport.

Milton broke a national record and won a gold and a silver medal at the Australian Track Championships in February in Sydney. Now Australia's fastest skier is keen to measure his performance on the road.

Having competed in five winter Paralympic Games and massing an impressive 22 international alpine skiing medals (including six Paralympic gold) Milton turned his focus to cycling mid-way through 2006. Although he admits his results seem impressive, he is quick to point out that he has a lot to learn.

"It's exciting being involved in a new sport and it's easy to be motivated early on when the gains are quite big. The true test will come later when all the time, energy and resources that I put into training amount to fractions of a second.

"My win in Sydney really spurred me on but the competition at an international level is tough. I have a lot of cycling to do before I can take them on," said Milton.

But perhaps he's being a bit modest. The skier-turned-cyclist has already recorded a time in the 3000m Pursuit that could see him selected in the Australian team to compete at the IPC World Cycling Championships in August and, on the strength of his performances so far, the ACT Academy of Sport has awarded him one of their top scholarships.

But, says Milton, it's not enough. He wants to run a B-Qualifying time which should give him automatic entry to the Australian team for the World Championships. To do that, he must record a much faster time in the 3000m Pursuit, around 12 seconds faster than his personal best.

But all this qualifying talk is about track cycling. Why is he competing on the road? According to Milton, who is still trying to work out the rules in his new sport, the Australian team is selected based on track results, even though most team members are required to also race in road events at international competitions.

"I'm a rookie. I need to race as much as I can both on the road and on the track. I need to be fitter, stronger, faster, smarter, better prepared and more experienced. I wont get any of that sitting at home," Milton said. Plus, he and coach John Armstrong are still in the process of working out which will be his strongest events.

There's also the chance that senior cycling staff at the Toyota AWD National Road Cycling Championships will see him race. Perhaps they will give him some feedback, a few pointers to help him reach his goal sooner and maybe they will notice his potential.

"I've been at the top of the skiing ladder for such a long time. It's great to be down at the bottom, learning from others and facing big challenges and goals. I'm really enjoying cycling and can't wait to get better at it," said a determined Milton.

But don't think that all this talk of cycling means he's given up on skiing. Four years ago Milton took up speed skiing, the drag racing of the ski slopes. He broke the world record for an athlete with a disability in his rookie year and 12 months ago clocked 213.65km/hr which made him Australia's fastest skier ever, regardless of the limb-count. He had plans to head back to Europe in March 2007 to better that mark but poor snow conditions forced him to stay at home.

"It was a tough decision to make and I left it to the last moment. There's nothing like the thrill of speed skiing and I plan to continue competing for a few years yet," explained Milton. "In the meantime though, there's cycling and a whole new set of goals to reach. I can be a skier and a cyclist…"

And a mountain climber and a trekker and….

For more information or to arrange an interview or a photograph with Michael Milton, please contact: