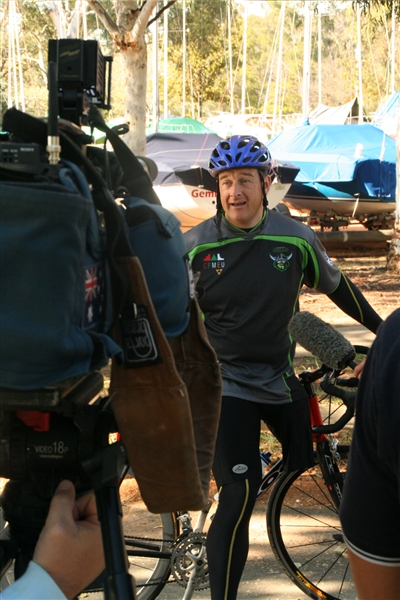 The Raiders pledged $1200 to Austcare's 'Playing Fields not Minefields' campaign which aims to de-mine areas and turn them into safe fields where children can play. The Club's donation will pay to clear 900m2 of land in Cambodia.

Milton's actively involved in landmine action since becoming an Austcare Ambassador a year ago after visiting a refugee camp on the Kenya-Sudan border.

"Those few days in Kakuma really opened my eyes to the plight of refugees. I wanted to help but didn't know how to. It's so easy to be overwhelmed by the sheer enormity of the challenge.

"Austcare suggested I get involved with their landmine action program, with a particular emphasis on sport. Since then I've learned that a little effort on my part makes a huge difference to so many people," said Milton.

In February he organised a fundraiser with the Canberra Cycling Club and raised $2200 to buy bicycles for Cambodian mine clearance workers.

"We easily over-shot our goal of $1200 which means we will also buy bikes for the next round of recruitments. We're helping to create employment, improving people's quality of life and saving lives by assisting in the clearance of more landmines. All that for just $2200," explained Milton.

Each year an estimated 15,000 to 20,000* people are casualties of landmines. Over 80 percent* of them are civilians, 23 percent are children. Some 50 percent die before reaching a hospital.

The injuries sustained by mine accidents are severe, and include destroyed limbs, shrapnel wounds, blindness and burns. Today, approximately 500,000* people around the world have survived a landmine accident. Providing assistance to survivors in developing countries remains an ongoing challenge.

To help raise awareness and funds for Austcare's landmine action programs, corporate and community groups have been invited to run "Playing Fields Not Minefields" activities and a Hot Cross Bun Morning Tea. Go to www.austcare.org.au for more information.

* All figures are estimates provided by Landmine Monitor Report 2006, a copy of which may be found online http://www.icbl.org/lm/2006/