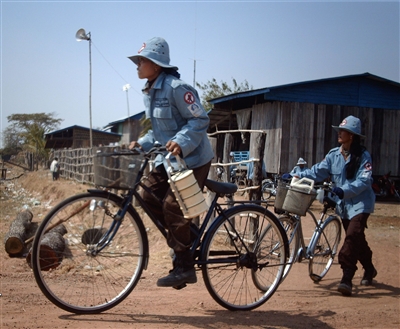 Michael Milton and the Canberra Cycling Club joined forces to raise enough money to buy new bicycles for 32 landmine clearance workers in Cambodia who now have a safer, quicker way to get to work..

The mostly female landmine de-mining group from the Banteay Meanchey province of Cambodia work full-time clearing landmines from high traffic areas like river banks and roads. Many reported feeling tired from walking up to 14km a day to and from work.

"Obviously fatigue is no good when you're a de-miner and, although a bike costs the equivalent of a month's food for a family of four in Cambodia, it's only about $30 to us. It was pretty much a no-brainer," explained Milton who began working with Austcare after visiting Kakuma Refugee Camp in Kenyaand seeing first-hand some of the projects funded by the humanitarian aid organisation.

Canberra Cycling Club doubled the entry fee for its annual club championship at the new Stromlo Park Criterium Course, called for donations and hosted a celebrity race. In one night they raised $2212, well above the target.

Michael Smith, CEO of Austcare, said it was a perfect example of how the generosity of a small group of people can make an enormous difference.

"The power of a simple bicycle cannot be underestimated. They are safer going to and from work, they are safer at work and they can spend more time at home with their families.

"We really are so grateful to the Canberra Cycling Club and everyone who helped raise the funds. They just didn't hesitate and I'm sure they will be pleased to see the results," said Smith.

Austcare's landmine program in Cambodia is expanding in the coming months and, thanks to the additional funds raised by the Stromlo Park racers, the new workers will receive their bicycles immediately.

"That extra money will help to create more employment which in turn means better health and education. These types of projects have a ripple effect with flow-on benefits for people and communities," said Smith.